In South Africa, August is Women’s Month – and each year August 9th is celebrated as Women’s Day.

Women’s Day celebrates the strength and resilience of women and their contribution to society and country.

Women’s Day forms part of South Africa’s Women’s Month which provides an opportunity to pay tribute to the generations of women whose struggles laid the foundations for the progress made in empowering women and achieving gender equality to date.

Women’s Day is a important day to call for equality

National Women’s Day is a South African public holiday commemorating the 1956 march of approximately 20,000 women to the Union Buildings in Pretoria to petition containing more than 100,000 signatures against the country’s pass laws that required South Africans defined as “black” under The Population Registration Act to carry an internal passport, known as a pass, that served to maintain population segregation, control urbanisation, and manage migrant labour during the apartheid era.

The 1956 protest saw members of the Federation of South African Women (FSAW) rally against the Apartheid government. The protest was supported by mothers, daughters, sisters and friends who decided enough was enough and came together to initiate change. Not only did they march, they remained standing outside the Union Buildings in silence for 30 minutes in a non-violent and very powerful display of unity.

The first National Women’s Day was celebrated on 9 August 1995. In 2006, a reenactment of the march was staged for its 50th anniversary, with many of the 1956 march veterans participating.

The struggle for liberation 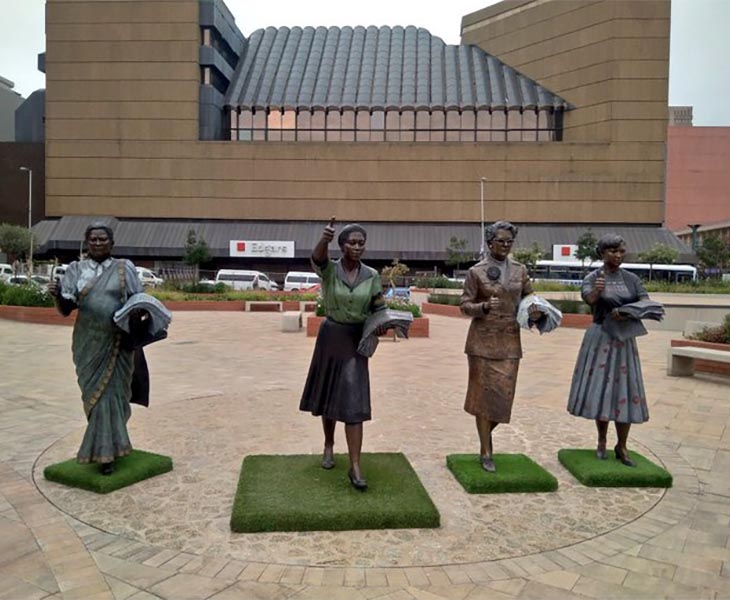 The Federation of South African Women was launched in Johannesburg in 1954 as the first attempt to establish a broad-based women’s organization. The group was conceptualized by Amina Cachalia (pictured above, left), Lillian Ngoyi (second from left), Ray Simons (second from right), Helen Joseph (right).

The group’s constitution stated the objectives of the Federation were to bring the women of South Africa together to secure full equality of opportunity for all women, regardless of race, colour or creed; to remove social, legal and economic disabilities; to work for the protection of the women and children.

A Women`s Charter was written at the Federation’s first conference and called for the enfranchisement of men and women of all races; equality of opportunity in employment; equal pay for equal work; equal rights in relation to property, marriage and children; and the removal of all laws and customs that denied women such equality. The Charter further demanded paid maternity leave, childcare for working mothers, and free and compulsory education for all South African children.

August is Women’s Month in South Africa and, each year on August 9, Women’s Day is celebrated in recognition of the strength and resilience of women and their contribution to their society and country. It’s a national opportunity to pay tribute to generations of women whose struggles provided the groundwork and paved the way for the progress made in empowering women and achieving gender equality to date.

First marked in 1995, August 9 is also a public holiday that commemorates the march of 1956 when 20,000 women from all parts of South Africa – armed with a petition containing more than 100,000 signatures – headed to the Union Buildings in Pretoria in protest against laws requiring “black” South Africans to carry an internal passport under The Population Registration Act. Known as a dom pass, or “dumb pass”, the passport served to maintain population segregation, control urbanisation and manage migrant labour during the apartheid era.

The 1956 protest was organized by members of the Federation of South African Women (FSAW) and was widely supported by mothers, daughters, sisters and friends from all over who came together to initiate change. Not only did they march, they remained standing outside the Union Buildings in silence for 30 minutes in a non-violent and powerful display of unity. This was followed by the rendition of a protest song composed in honour of the occasion, “Wathint’ Abafazi, Wathint’ Imbokodo”, which translates to “Now you have touched the woman, you have struck a rock” – a phrase (or its latest incarnation: “you strike a woman, you strike a rock”) that has now come to represent women’s courage and strength in South Africa. The FSAW called for the enfranchisement of South African women of all races, equality of opportunity in employment; equal pay; equal rights in relation to property, marriage and children; and the removal of all laws that denied women such rights. They also demanded paid maternity leave, childcare for working mothers, and free and compulsory education for all South African children.

On this day in 2016, President Jacob Zuma unveiled the Women’s Living Heritage Monument at Lillian Ngoyi Square in Pretoria, in honor of the women’s march. The monument, which includes artwork and murals, tells the story of women’s contribution to the liberation struggle and features statues of four heroic women, Lillian Ngoyi, Sophia de Bruyn, Helen Joseph and Rahima Moosa who led the protest.

Sophia de Bruyn, who was only 18 years old at the time of the protest, would go on to be the first recipient of the Women’s Award for exceptional national service and is the last living leader of the Women’s March. Lillian Ngoyi was the first woman elected to the executive committee of the African National Congress, and was a founding member the FSAW. The Strijdom Square from which the women marched in 1956 was renamed for Ngoyi. Women’s Month and Women’s Day continue to draw attention to the many and important issues that women in the country – and all over the world – still face, such as domestic violence, discrimination in the workplace, unequal pay, sexual harassment, lack of education for girls and much more.

Women’s Day also provides an opportunity to reflect on how far South African women have come in their quest for a better society, and their work to dismantle the unequal power relations between women and men. It serves as an annual reminder that gender oppression, patriarchy, sexism, racism, ageism, structural oppression are all battles that women have been fighting for decades and creating a safe environment that empowers women to take control of their lives is always a priority and battle worth fighting.

National Women’s Day in South Africa is celebrated on the 9th of August every year. This public holiday serves as reminder of the crucial role that women play not only in our country, but in society as whole.

This day is not to be confused with International Women’s day which is celebrated globally on the 8th of March. Although an equally important day for women, it celebrates the overall contributions that women have made in cultural, political, social and economic environments all over the world.

However, South Africans have a far more specific reason for celebrating their National Women’s day.

WHY DO WE CELEBRATE WOMEN’S DAY IN SOUTH AFRICA?

This day is not just another public holiday; it’s an opportunity to pay reverence to the South African women who stood together to fight against laws that not only affected women in South Africa, but all people of colour.

On the 9th of August 1956, 20 000 women from all over the country took to the streets in one of the biggest demonstrations in our county’s history, in protest against Pass laws for women.

A Pass was a document of permission which allowed people of colour to enter “restricted” areas during the apartheid regime.

The first attempt made by the South African government in 1913 to enforce pass laws on women was met with major backlash and resistance. These laws would have required women living in urban townships to purchase a new “pass” every month.

This, despite the fact that many of these women were not permitted to work, so affording a new pass each month would be impossible.

The civil unrest resulted in hundreds of women being sent to prison. Eventually, the pass requirements for African women were withdrawn, until the early 1950s when they were reintroduced. 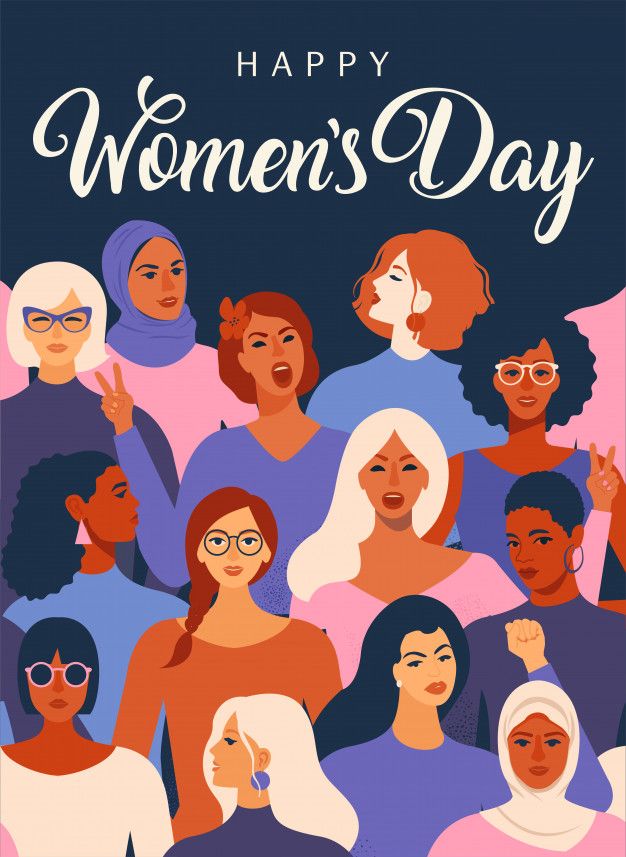 The Federation of South African women determined that these pass laws would further restrict their freedom of movement and continued to support the notion that women were not competent or mature enough to have any roles outside of the household.

4 brave women, together with 20 000 followers, marched towards the Parliament building in Pretoria to hand over a pile of petitions collectively containing about 100 000 signatures against the pass law amendments.

The prime minister at the time was not there to receive the petition, but the brave women sent a clear, public message that they refuse to be silenced or have their freedom taken from them by unjust laws.

The petitions were received by the prime minister’s secretary and after standing in absolute silence for 30 minutes, the women began to sing a song that was written for the occasion.

“Wathint` abafazi, Strijdom!” the message was clear: you strike a woman, you strike a rock! This song has become a key representative of the strength and courage of South African women.

The march was described as one of the most disciplined, dignified and emotional demonstrations the country had ever seen. They made a unanimous decision that if the police tried to stop them, every woman would go down onto her knees to pray, and that if one was arrested, they would all be arrested in the name of solidarity.

The women sang Nkosi Sikeleli Afrika at the very end of their courageous protest before walking away peacefully, and perhaps with the knowing that they had just made history.