US Open Tennis Ground Pass tickets need to be purchased before you travel, you cannot buy them at the venue itself. US Open Tennis is one of the four Grand Slam tournaments and takes place each year in New York. This two-week tournament is the biggest sporting event in the US with the most spectators. The US Open Tennis is held during the last week of August and the first week of September. This event is a stage for the biggest names in tennis and also where the most dramatic and challenging matches take place. It is also the last Grand Slam of the year.

You can buy tickets to a match or a session at US Open Tennis by looking for the date when you’d like to visit a match or view the table below. The tickets can be paid by credit card or PayPal and are sent to your address or email.

Picking e-tickets is the fastest option and it saves shipping costs, so I would highly recommend this option. Your tickets are 100% guaranteed authentic and delivered on time. 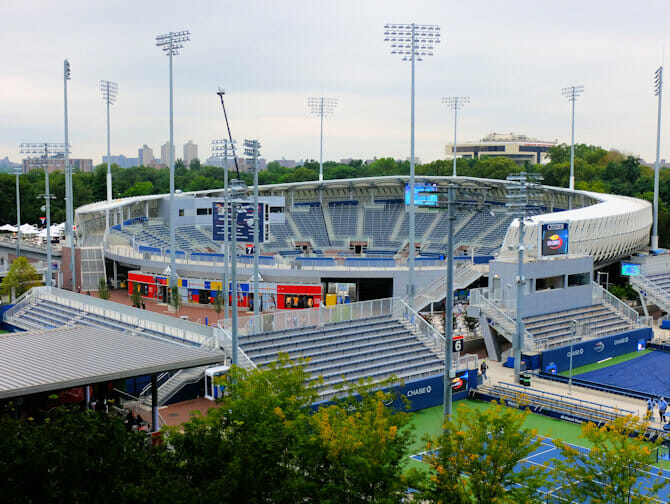 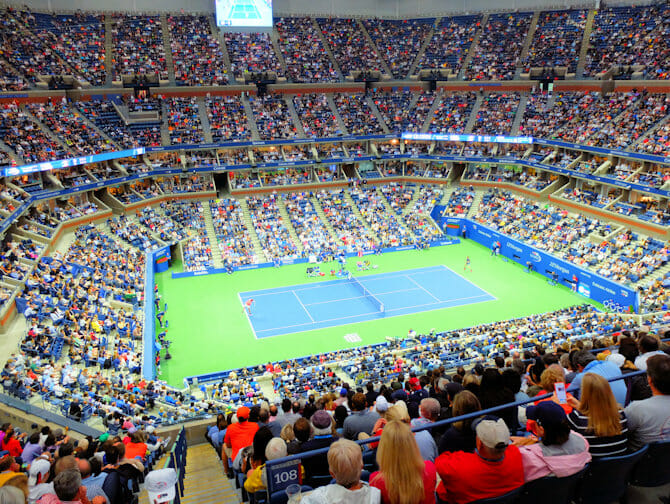 Which US Open Tennis Session to Attend?

Since the tournament is two consecutive weeks long, you should consider which days you want to attend. Tickets for the beginning rounds of the US Open Tennis are cheaper than at the end of the tournament (the Championships). Day tennis matches cost more, because there are more tennis matches to watch: Day sessions last from 11:00 until the matches are completed (usually in the evening). The evening sessions begin at 19:00 and only last a few matches.

Finally, there are three types of tickets: Arthur Ashe, Louis Armstrong, and General Admission (Grounds Pass). If you buy a ticket for the Arthur Ashe Stadium, you get a designated seat at centre court. This is where you will find the top matches in tennis. So if you want to see the top tennis stars and the celebrities that watch court-side, then you must buy tickets for Arthur Ashe. Additionally, an Ashe Stadium ticket will give you access to other tennis courts at the US Open, including the Louis Armstrong, the Grandstand, and the eighteen outdoor courts.

In addition to the Arthur Ashe Stadium, there is another main stadium, Louis Armstrong, but this is a smaller stadium where secondary matches are played. You can buy a ticket for an assigned seat court-side. Court-side at Armstrong will be much better seats than you can score at Ashe. However, an Armstrong ticket will not give you entry to the Arthur Ashe Stadium. An Armstrong ticket will provide you an assigned seat in Armstrong, access to the Grandstand (the third and smallest stadium of the show courts), and the eighteen outside courts.

If you decide not to spend the money for the more expensive tickets for Arthur Ashe or Louis Armstrong, then you can purchase a General Admission pass. This is only available for sale for day sessions. With this ticket, you can visit the Armstrong Stadium (top rows only), Grandstand, and all eighteen outside courts. In addition, there is a jumbo TV screen on the grounds where you can follow the matches played in the Arthur Ashe Stadium live. Since most of the tennis matches in Ashe are the American players or the top tennis players, the chances are great that you will easily be able to watch Andy Murray, Novak Djokovic, or Rafael Nadal on one of the outside courts. 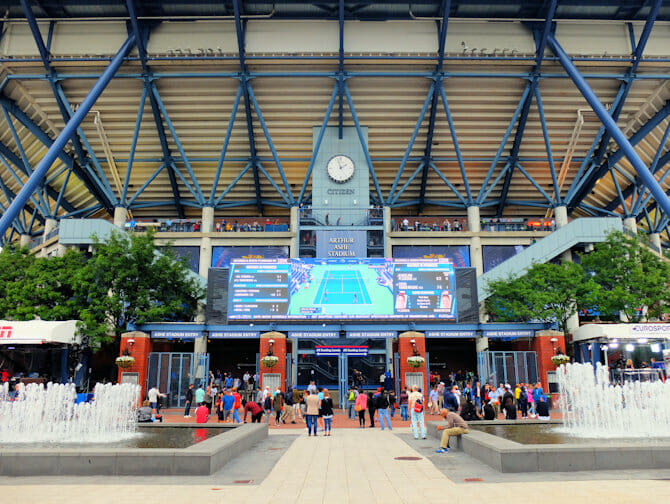 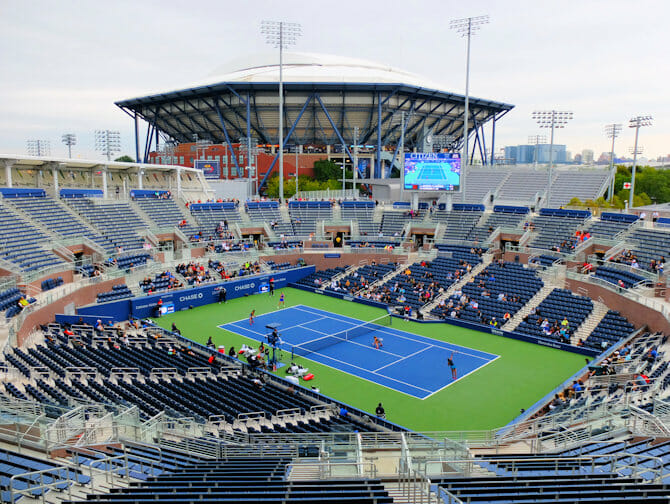 How to get to the Arena

Take subway line 7 that leaves from Times Square and Grand Central Station to the stop Mets Stadium – Willets Point. When you get out it will be clearly marked how to walk to the stadium. You can use the MetroCard which means that the trip will only cost you $2.75.

How to get Back to New York?

The best way to get back to Manhattan is the 7 subway line. Even at night the subway is safe because you will not be the only tennis fan heading ‘home’. There are also taxis available but that will costs you up to $60.

Eating During the US Open Matches

If you want something to eat or drink, there is plenty to choose from all day – from morning until night! There is something for everyone: sandwiches, ice cream, hamburgers, pizza, coffee, cocktails, beer, wine, and much more. In addition to the food court and food stands located throughout the grounds, there are several restaurants. There is a Brazilian restaurant called Mojitos and they have the best terrace for people watching as the fans and even players walk by. However, it’s not cheap. The food and drinks there are pricey. A simple sandwich and non-alcoholic drink can cost you about $20.

What can you Take with you to the Stadium?

When going to the US Open Tennis, leave your large backpacks, laptops, large bags, video recorders, and cigarettes in your hotel room. You cannot smoke anywhere on the grounds at the US Open. Cameras are permitted, however, food and drinks from outside are not allowed. Before entering the US Open, you will be checked by security.

One of the highest-attended annual sporting events in the world, the US Open features some of the greatest athletes on the planet. Held each year in New York City, the event is the fourth and final tournament of the annual Grand Slam (along with the French Open, the Australian Open and Wimbledon. The US Open presents an opportunity to see today’s best players competing alongside the next generation of young talent. Grab your family and head to New York to watch these incredible athletes as they square off in heated competition. If you don’t have plans for August and September and are looking for a great family vacation, purchase your US Open tickets today.

The tournament has taken on multiple formats over the years, but its earliest roots trace all the way back to the late 1800s. In 1881, the series of matchups was referred to as the US Open National Championship and was held at the Newport Casino in Rhode Island. At that time, the tournament took on a very different structure in which the defending champion was entitled to an automatic berth in the final matchup the following year, which paved the way for several dynasties. Since then, nearly everything has changed about the tournament, save for the fact that it brings together the most highly skilled players in the sport. The event didn’t begin its tenure in New York until multiple petitions were brought against the governing body to move it to a cultural hotspot in 1915. The competition was held at the West Side Tennis Club from 1915-77, first on grass, then on clay. The US Open has been held on outdoor hard courts at the USTA Billie Jean King National Tennis Center since 1978.

The tournament is one of the crowning events of the world tennis circuit, and it has a prize purse to match, with the total payout for all players averaging more than $30 million. In 2017, the total prize money for the US Open was $50.4 million, making it the richest purse in tennis history, with a record $3.7 million going to the men’s and women’s champions. The total purse increased approximately $4 million, or roughly 9 percent, from the previous year, and fulfilled a commitment made by the United States Tennis Association five years earlier to reach the $50 million benchmark. With this increase, the US Open became the first tennis tournament in history with total prize-money compensation topping $50 million.

The US Open is absolutely steeped in tradition. From Arthur Ashe and Virginia Wade winning the first US Open singles titles in 1968 to Serena and Venus Williams contesting the first women’s single final shown live in prime time, the tournament has continued to evolve and inspire. The US Open has also been at the forefront of Grand Slam innovation, introducing the final-set tiebreak in 1970, offering equal prize money to men and women in 1973, debuting night matches in 1975 and unveiling blue courts in 2005.

Night matches remain a unique and unforgettable experience for fans and players alike. Tickets for the evening session are sold separately from day tickets, so ensure that you note this when ordering tickets or planning your trip. There are dedicated night sessions in both Arthur Ashe Stadium and the new Louis Armstrong Stadium. Prior to the tournament, Fan Week offers fans a chance to see the top stars practicing up close as lower-ranked players compete in the US Open Qualifying Tournament, while Arthur Ashe Kids’ Day offers music, excitement and entertainment for the whole family. Today, fans can immerse themselves in the history of the US Open by visiting the Court of Champions, which honors and celebrates the legacy of the greatest champions in the history of the tournament.

us open tennis finals , formally the United States Open Tennis Championships, international tennis tournament, the fourth and final of the major events that make up the annual Grand Slam of tennis (the other tournaments are the Australian Open, the French Open, and the Wimbledon Championships). Who was the first tennis player to win the Grand Slam in one year? […]