US Open Tennis Center : Construction has begun on building a 350-bed hospital facility at the USTA Billie Jean King National Tennis Center, the home of the US Open.

The move comes as the city continues to respond to the COVID-19 coronavirus pandemic. New York City is among the hardest-hit places in the United States.

Separately, Louis Armstrong Stadium, the second-largest stadium on the grounds behind Arthur Ashe Stadium, will be utilized to prepare and distribute up to 25,000 packages of meals every day.

Each package (pictured being assembled above) will consist of two days’ worth of breakfast, lunch and dinner for patients, workers and children.

Zausner was contacted earlier this month after New York Governor Andrew Cuomo announced the expected need for thousands of additional hospital beds. Officials visited the site last Tuesday and again on Friday before deciding on Monday the Indoor Training Center met their needs.

Crews began building out the first 150 beds over six courts (pictured below) on Tuesday morning. Two more banks of three courts will be transformed into space for 100 beds each later this week. It is expected the first patients will be treated in the hospital early next week. 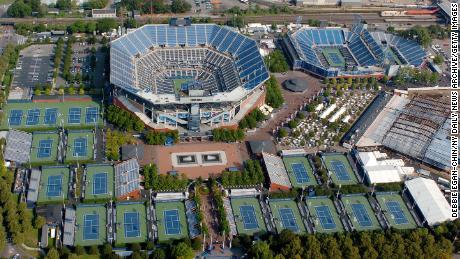 “There are two ways of looking at this,” New York City mayor Bill de Blasio said Tuesday at a press briefing held at the NTC. “If you want to say the glass is half empty, you would say these tennis courts symbolize what we’re all going through right now. We’d all like to go back to the times when things were normal and people were out here playing tennis. We all feel that, I feel that. We miss it and it’s sad. But we also know that this crisis will not go on forever. It will be very intense, but thank God, it will be brief.

“When I look here, I see the glass as half full. Which is the fact that everyone is rising to the challenge. Everyone is contributing each in their own way. We have people from organizations all over the city, all over the world, calling literally every single hour offering help. When the folks here at the tennis center heard there was a need, they said yes immediately. … I’m looking forward to the day when this is going to be a place for tennis again. But in the meantime I’m inspired by the fact that people are stepping up.”

The NTC becomes the second site in Queens to be used as a temporary hospital after the Aqueduct racecourse was earmarked last week.

Levy Restaurants, the food and beverage supplier for the US Open, and Restaurant Associates are using the stadium’s commissary to fulfill the packages. Teams will then box up the meals for distribution. Crews will work in two shifts, from 6 a.m. to 3 p.m. and from 2 p.m. to 11 p.m. six days a week.

“The city needs to create and distribute in excess of 100,000 meals a day for COVID-19 patients, workers and underprivileged school children who rely on breakfast and lunch in the school system for their nourishment for the day,” Zausner said. “Tractor-trailers started arriving Monday from all over the country with the food.

Added de Blasio: “Right here at the Billie Jean King [National Tennis] Center, named after someone who is such a hero to so many of us, I think it’s very fitting, I think Billie Jean would agree, that this place will be a life-saving place.”

To help you plan your US Open Tennis experience, you can view the US Open schedule below. This tentative schedule includes the highlights of the tournament (the singles play and the doubles finals) but there is plenty more to see at the US Open. If you’re interested in another division including mixed doubles, wheelchair, junior, […]

US Open Tennis Facility: Use mass transit to make your trip to the US Open convenient and cost-effective. Subway: The 7 train provides service from Grand Central Terminal to Mets-Willets Point Station, including connections for all Metro-North Trains from Westchester and Connecticut. Service is also available from the Port Authority Bus Terminal. Long Island Rail Road: LIRR […]