Halloween Costume The wearing of Halloween costumes in America reaches back into the country’s cultural history. This shared American folk ritual is a window on the diverse ethnic and religious heritage of the people who settled the United States.

Halloween itself has deep folk roots. It originates with the Celtic Day of the Dead autumn festival of Samhain, celebrated by Celts throughout Europe in ancient times and celebrated still in northern France, Ireland, Scotland, Wales, and other regions where the Celtic heritage is preserved. The Celts used a lunar calendar and divided the year into two seasons. Winter, the season of the dying, began on Samhain (which roughly translates as “summer’s end”), which fell on the full moon closest to 1 November after the harvest was complete.

Originally a feast marking the departure of souls from the material world to the spiritual world of the dead, All Hallows’ Eve was widely celebrated throughout the European world, and particularly in countries with a Catholic tradition. In America, the seeds of the distinctively American festival of Halloween date back to the 1840s. The arrival in the country of large numbers of Irish immigrants, following the disastrous potato famine in Ireland, helped establish the feast in America. Their celebrations of All Saints’ and All Souls’ Days still preserved many of the ancient rites of Samhain. For example, the carving of pumpkins comes from the Irish legend of Jack, a man so evil that when he died he was rejected by both heaven and hell and was condemned to roam the countryside with nothing but a glowing turnip for a head. 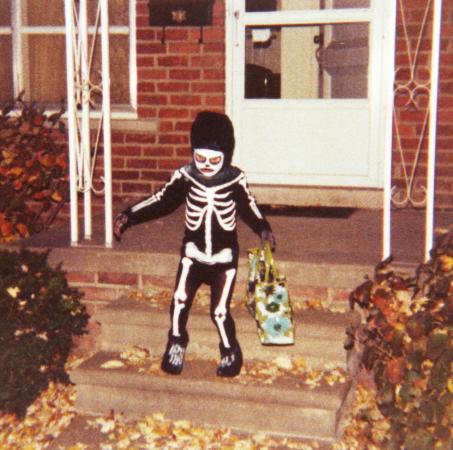 During Victorian times, Halloween began to become a quaint holiday with rituals that emphasized children’s participation; the festival’s folk and religious roots were downplayed. By the early twentieth century, Halloween had become a celebration for children. Community organizations arranged parades and haunted houses. During the 1940s trick or treat was added to the traditions; this custom of begging in costume had very old roots in European culture, and was explicitly transgressive, forgiving behavior that would otherwise be frowned upon. Children would sing or perform mimes in exchange for a treat; they also implicitly threatened to play tricks on householders if a treat was not forthcoming. Homemade masquerade costumes appeared as early as the nineteenth century. Women’s magazines printed instructions for making costumes at home. Later these homemade costumes increasingly gave way to commercially produced costumes, a trend that began at the time of the industrial revolution. During the second half of the nineteenth century, advances in technology made commercially produced costumes cheaper, better made, and more varied. The earliest costume themes, all of which continue to the early 2000s, were ghosts, skeletons, devils, and witches. Otherworldly creatures such as Frankenstein, the Mummy, and Dracula are drawn from popular culture.

Paper CostumesThe Dennison Manufacturing Company in Massachusetts began making paper costumes in 1910. Collegeville, located in Pennsylvania, began as a company that produced flags and later used the scraps to create costumes around 1910 and continued to make early clown and jester costumes. Its namesake founded the Ben Cooper Company in 1927. Based in Brooklyn, New York, Cooper created theatrical sets and costumes for the Cotton Club and the Ziegfeld Follies, and expanded into Halloween costumes in 1937. The company later joined with A. S. Fisbach, a New York City-based costume company that held the license to Disney characters, such as Donald Duck, Mickey and Minnie Mouse, and the Big Bad Wolf, and packaged them under the name Spotlight. Cooper sold his company in the 1980s to Rubies, also in New York, which has become one of the largest producers of Halloween and Purim costumes in the United States.

Many of the masks for the early costumes were produced by U.S. Mask Company in Woodhaven, New York. Their earliest gauze masks, made of buckram, were sprayed with starch and steamed over a mold. Themes included witches, clowns, and animals. In the 1950s vacuum-formed latex masks appeared. Figures from popular culture, such as the Beatles and John and Jacqueline Kennedy, joined TV and film personalities such as Laurel and Hardy, and dolls and action figures such as Barbie and G.I. Joe, in being molded in latex. Other major costume companies in America included Halco, in Pennsylvania; Bland Charnas Company on Long Island, New York; and E. Simons and Sons, in New Orleans, Louisiana.

The costumes produced in America are testaments to the creative powers of ordinary people. The makers demonstrate a technical and aesthetic skill that reflects the handmade techniques used in home production and in factories before mass-machine production took over. These costumes express the personal, social, and cultural identity of the people, and transcend the barriers of class and ethnicity. Halloween has become a uniquely American ritual, not only for children but for adults as well, and it grows in popularity from year to year. (Halloween has also become an important holiday for the gay community, with large, elaborate costume parades in San Francisco, New York’s Greenwich Village, and other gay centers.) Halloween allows individuals to experience and explore the shared ethnic, cultural, and folk celebrations that have engaged diverse peoples since ancient times.

The Jewish festival of Purim, which commemorates the Biblical story of Esther, is celebrated on the fourteenth and fifteenth days of the twelfth month of the Jewish calendar, usually in March. In America, Purim celebrations have taken on many of the trappings of Halloween, with costumed children wielding noisemakers and giving gifts of food or donating to charity.