Good Friday is perhaps the most solemn day that Christians observe. It is a time when we reflect upon all that Jesus did for us when He willingly gave His life on the cross at Calvary. It is good to review some verses from the Bible that tell us about the crucifixion.  Reflecting on Good Friday leads us to the wonderful message of how God loved us so much that He gave his precious Son, Jesus, to die as our perfect Lamb of God. When we accept this Bible truth, that Jesus died for everyone and rose again on the 3rd day, and we make it personal we too are promised eternal life, just like Jesus. Take a look at the video below of the great Negro Spiritual “Were You There?” performed by Crystal Lewis and Michal Phillips. Then look at these 20 Bible verses about Good Friday that you can work on learning between now and Easter. Note: the Isaiah 53:3-9 passage is a challenge for the advanced Bible student, or one who has an exceptional memory.

Isaiah 52:13 Behold, my servant shall act wisely;  he shall be high and lifted up, and shall be exalted.


Isaiah 53:3-9 He was despised and rejected by men; a man of sorrows, and acquainted with grief; and as one from whom men hide their faces he was despised, and we esteemed him not.  Surely he has borne our griefs and carried our sorrows; yet we esteemed him stricken, smitten by God, and afflicted.  But he was pierced for our transgressions; he was crushed for our iniquities; upon him was the chastisement that brought us peace, and with his wounds we are healed. All we like sheep have gone astray; we have turned—every one—to his own way; and the LORD has laid on him the iniquity of us all.  He was oppressed, and he was afflicted, yet he opened not his mouth; like a lamb that is led to the slaughter, and like a sheep that before its shearers is silent, so he opened not his mouth.  By oppression and judgment he was taken away; and as for his generation, who considered that he was cut off out of the land of the living, stricken for the transgression of my people?  And they made his grave with the wicked and with a rich man in his death, although he had done no violence, and there was no deceit in his mouth.


Psalms 22:1 My God, my God, why have you forsaken me?  Why are you so far from saving me, from the words of my groaning?


Psalms 22:6-7 But I am a worm and not a man, scorned by mankind and despised by the people. All who see me mock me; they make mouths at me; they wag their heads;


Psalms 22:18 they divide my garments among them, and for my clothing they cast lots.


Zechariah 12:10 “And I will pour out on the house of David and the inhabitants of Jerusalem a spirit of grace and pleas for mercy, so that, when they look on me, on him whom they have pierced, they shall mourn for him, as one mourns for an only child, and weep bitterly over him, as one weeps over a firstborn…”

Some Events of the Day

John 18:12 So the band of soldiers and their captain and the officers of the Jews arrested Jesus and bound him.

Mark 14:63-65 And the high priest tore his garments and said, “What further witnesses do we need?  You have heard his blasphemy. What is your decision?” And they all condemned him as deserving death.  And some began to spit on him and to cover his face and to strike him, saying to him, “Prophesy!” And the guards received him with blows.

John 18:38-39 Pilate said to him, “What is truth?” After he had said this, he went back outside to the Jews and told them, “I find no guilt in him. But you have a custom that I should release one man for you at the Passover. So do you want me to release to you the King of the Jews?”

Luke 23:27-31 And there followed him [Jesus] a great multitude of the people and of women who were mourning and lamenting for him.  But turning to them Jesus said, “Daughters of Jerusalem, do not weep for me, but weep for yourselves and for your children. For behold, the days are coming when they will say, ‘Blessed are the barren and the wombs that never bore and the breasts that never nursed!’ Then they will begin to say to the mountains, ‘Fall on us,’ and to the hills, ‘Cover us.’  For if they do these things when the wood is green, what will happen when it is dry?”

Matthew 27:3-5 Then when Judas, his betrayer, saw that Jesus was condemned, he changed his mind and brought back the thirty pieces of silver to the chief priests and the elders,  saying, “I have sinned by betraying innocent blood.” They said, “What is that to us? See to it yourself.” And throwing down the pieces of silver into the temple, he departed, and he went and hanged himself.


Matthew 27:45-46 Now from the sixth hour there was darkness over all the land until the ninth hour. And about the ninth hour Jesus cried out with a loud voice, saying, “Eli, Eli, lema sabachthani?” that is, “My God, my God, why have you forsaken me?”


Matthew 27:50 And Jesus cried out again with a loud voice and yielded up his spirit.


Matthew 27:54 When the centurion and those who were with him, keeping watch over Jesus, saw the earthquake and what took place, they were filled with awe and said, “Truly this was the Son of God!”


John 19:31-33 Since it was the day of Preparation, and so that the bodies would not remain on the cross on the Sabbath (for that Sabbath was a high day), the Jews asked Pilate that their legs might be broken and that they might be taken away. So the soldiers came and broke the legs of the first, and of the other who had been crucified with him. But when they came to Jesus and saw that he was already dead, they did not break his legs.


The Promise for those who Believe

Romans 6:22-23 But now that you have been set free from sin and have become slaves of God, the fruit you get leads to sanctification and its end, eternal life. For the wages of sin is death, but the free gift of God is eternal life in Christ Jesus our Lord.


1 Peter 2:24 He himself bore our sins in his body on the tree, that we might die to sin and live to righteousness. By his wounds you have been healed.


1 John 5:11-12 And this is the testimony, that God gave us eternal life, and this life is in his Son. Whoever has the Son has life; whoever does not have the Son of God does not have life. 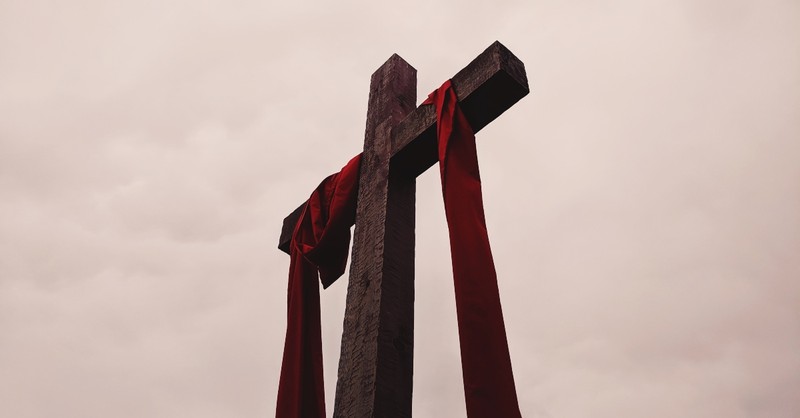 Good Friday is often a solemn day in the church calendar. Although we express gratitude for everything that God has done for us, on this day, we remember the great sacrifice it took for him to save us from our sin. Below I have compiled some Good Friday Bible verses that we can find throughout Scripture. The Old Testament prophesied that in order for us to attain salvation, someone had to pay the ultimate penalty. Jesus did just that for us.

From man’s first sin through the last prophets, we see many prophecies through Scripture that point to Jesus’ death on the cross. Most prominently, Psalm 22 and Isaiah 53 have shown striking similarities to what took place centuries later.

Genesis 3:15: “And I will put enmity between you and the woman, and between your offspring and hers; he will crush your head, and you will strike his heel.”

Psalm 22:16: “Dogs surround me, a pack of villains encircles me; they pierce my hands and my feet.”

Psalm 41:9: “Even my close friend, someone I trusted, one who shared my bread, has turned against me.”

Isaiah 53:5: “But he was pierced for our transgressions, he was crushed for our iniquities; the punishment that brought us peace was on him, and by his wounds we are healed.”

Zechariah 13:7: “Strike the shepherd, and the sheep will be scattered, and I will turn my hand against the little ones.”