It’s a tradition millions of us follow – eating fish on Good Friday.

It’s as much a part of Easter as chocolate eggs and the Easter bunny, only this tradition goes back much further.

Christians have abstained from eating meat on Good Friday for centuries and many people, whether or not they are religious, still will only eat fish on the day.

In fact many Christians, especially Catholics, won’t eat meat on any Friday.

The reason behind this tradition is very much a religious one.

It’s believed Jesus Christ suffered and died on the cross on a Friday, Christians from the very beginning have set aside that day to remember this and ‘unite their sufferings’.

This led the Church to mark every Friday as a ‘Good Friday’, where people remember the Passion by offering the ‘penance’.

Meat was seen as a worthy sacrifice as it was linked with feasts and celebrations.

In ancient cultures meat was seen as a delicacy and “the fattened calf” wasn’t slaughtered unless there was something to celebrate.

Fridays were seen as a day of penance so eating meat on a Friday to “celebrate” the death of Jesus didn’t sit well with the Church.

So why is fish not seen as meat?

“Abstinence laws consider that meat comes only from animals such as chickens, cows, sheep or pigs — all of which live on land. Birds are also considered meat.”

The distinction is mostly down to the Latin where the word used for meat is carnis, which means ‘animal flesh’.

Importantly, while meat was seen as celebratory, fish was seen as an ‘everyday thing’ with most people being fishermen.

The reason it may seem strange today is the cultural change in how we see meat, which has now become more of an everyday meal choice. It’s why people are often confused, as fish is now seen as more of a luxury.

Can you eat meat on Good Friday?

For Catholics observing Good Friday, the answer is no.

The Catholic law of abstinence says that Catholics aged 14 and older refrain from eating meat on Fridays during Lent, including on Good Friday.

As well as this, Catholics aged 18 to 59 fast on both Ash Wednesday and Good Friday – a rule within the Roman Catholic church that means you can only consume only one full meal, or two smaller meals in the day.

Why is it called Good Friday?

It may seem weird to call the day when Jesus was flogged and executed “good”, but there’s a reason behind it.

Some say it’s “good” as it’s holy, others say it’s a weird corruption of “God’s Friday”.

It’s technically neither, the Oxford Dictionary states the use is down to the actual meaning of the word, good “designates a day on (or sometimes a season in) which religious observance is held”.

So good means when there’s a religious day. The lesser known Good Wednesday, the Wednesday before Easter, follows the same principle.

Saying this, there is documentation of it being Gottes Freitag aka God’s Friday.

What else was banned on Good Friday?

Historically, gambling was also banned in Britain on Good Friday, until 2008 when betting shops were given permission to open up on the holiday.

Catholics abstain from flesh meat on Ash Wednesday, Good Friday, and the Fridays of Lent.

Abstinence is one of our oldest Christian traditions. “From the first century, the day of the crucifixion has been traditionally observed as a day of abstaining from flesh meat (“black fast”) to honor Christ who  sacrificed his flesh on a Friday” (Klein, P., Catholic Source Book, 78).

Up until 1966 Church law prohibited meat on all Fridays throughout the entire year.  The new law was promulgated in 1983 in the revised Code of Canon Law which states, “Abstinence [is] to be observed on Ash Wednesday and on the Friday of the Passion and Death of our Lord Jesus Christ” (Canon 1251). “All persons who have completed their fourteenth year are bound by the law of abstinence” (Canon 1252). The U. S. Catholic Conference of Bishops (USCCB) extended this law to include all Fridays in Lent.

Since Jesus sacrificed his flesh for us on Good Friday, we refrain from eating flesh meat in his honor on Fridays. Flesh meat includes the meat of mammals and poultry, and the main foods that come under this heading are beef and pork, chicken and turkey. While flesh is prohibited, the non-flesh products of these animals are not, things like milk, cheese, butter, and eggs.

Fish do not belong to the flesh meat category. The Latin word for meat, caro, from which we get English words like carnivore and carnivorous, applies strictly to flesh meat and has never been understood to include fish. Furthermore, in former times flesh meat was more expensive, eaten only occasionally, and associated with feasting and rejoicing; whereas fish was cheap, eaten more often, and not associated with celebrations.

Abstinence is a form of penance. Penance expresses sorrow and contrition for our wrongdoing, indicates our intention to turn away from sin and turn back to God, and makes reparation for our sins, it helps to cancel the debt and pay the penalties incurred by our transgressions.

Abstinence is a form of asceticism, the practice of self-denial to grow in holiness. Jesus asks his disciples to deny themselves and take up their Cross (Mt 16:24). Abstinence is a sober way to practice simplicity and austerity, to deny the cravings of our bodies to honor Jesus who practiced the ultimate form of self-denial when he gave his body for us on the Cross. Thus, to give up flesh meat on Fridays, only to feast on lobster tail or Alaskan king crab, is to defeat the ascetical purpose of abstinence. Less is more!  There are countless options for simple Friday meatless dinners:  pancakes, waffles, soup and rolls, chipped tuna on toast, macaroni and cheese, fried egg sandwiches, grilled cheese sandwiches, cheese pizza, and of course, fish.

Can You Eat Meat on Good Friday?

On Friday, Catholics worldwide will celebrate Good Friday, which precedes Easter Sunday. The holy day also marks the final Friday of Lent, the 40-day Catholic observance in which Catholics abstain from eating meat on Fridays.

The Catholic Church dictates that all Catholics 14 and older must abstain from meat and meat products every Friday of Lent, including Good Friday, and Ash Wednesday, according to Learn Religions. Prior to 1966, Catholics were expected to abstain from meat every Friday, regardless of whether it was Lent. Additionally, Catholics between 18 and 59 years old are expected to fast on Good Friday, which means they are only meant to eat one full meal. The United States Conference of Catholic Bishops (USCCB) does say that some food at other mealtimes may be permitted if necessary.

“Fasting on these days means we can have only one full, meatless meal. Some food can be taken at the other regular meal times if necessary, but combined they should be less than a full meal. Liquids are allowed at any time, but no solid food should be consumed between meals,” the USCCB states on its website. The group also acknowledges fasting exceptions to pregnant or nursing women and people who are ill, and says that common sense should be applied to who should fast.

Because Good Friday is the day that Christians observe their savior, Jesus Christ, dying on the cross, abstaining from eating meat is a recognition of his sacrifice. “Since Jesus sacrificed his flesh for us on Good Friday, we refrain from eating flesh meat in his honor on Fridays,” Father Michael Van Sloun wrote on the Archdiocese of St. Paul and Minnesota’s website. Flesh meat includes the meat of mammals and poultry, and the main foods that come under this heading are beef and pork, chicken and turkey. While flesh is prohibited, the non-flesh products of these animals are not prohibited—meaning things like milk, cheese, butter, and eggs.” And despite the restrictions on meat, fish is still permitted.

Due to the coronavirus pandemic, some bishops have excused their dioceses from the Friday abstinence, but Catholics are still expected to observe Good Friday by abstaining from eating meat, such as the Most Reverend James F. Checchio of Metuchen. 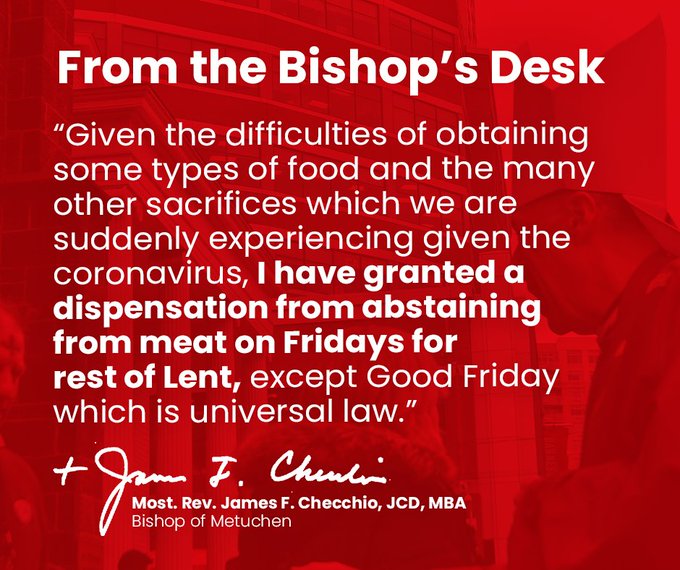 The Catholic Diocese of Pittsburgh’s Bishop David Zubick and Diocese of Houma Thibodaux’s Bishop Shelton J. Fabre also dispensed the need to abstain from meat, but wrote that since Good Friday is a holy day, the abstinence and fasting could not be dispensed.