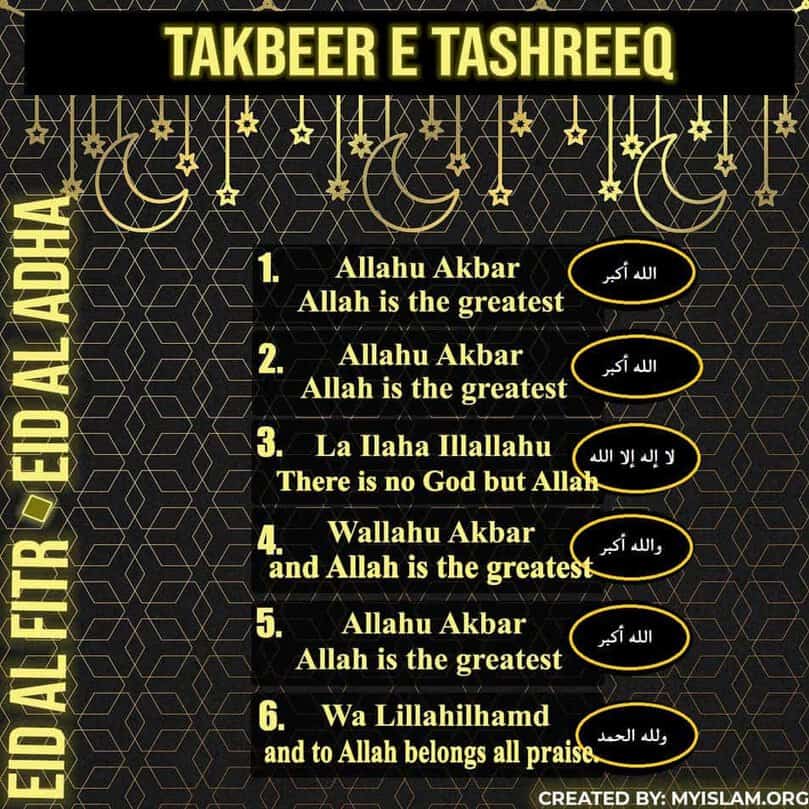 The month of Ramadhan [is that] in which was revealed the Qur’an, a guidance for the people and clear proofs of guidance and criterion. So whoever sights [the new moon of] the month, let him fast it; and whoever is ill or on a journey – then an equal number of other days. Allah intends for you ease and does not intend for you hardship and [wants] for you to complete the period and to glorify Allah for that [to] which he has guided you; and perhaps you will be grateful.

One of the best ways to ‘glorify Allah for that which has guided you’ is to recite takbeer which is reciting Allahu akbar meaning “Allah is the greatest”.

However, on Eid day there is a special Takbeerat called Takbeer E-Tashreeq (tashriq) and majority of scholars are in agreement that it is part of the Sunnah of Prophet Muhamamd  to recite (ﷺ).

WHAT IS THE MEANING OF THE EID TAKBEER:

The translation of the takbir for Eid is:

There is a different variation in which Allahu Akbar is recited three times instead of two, and it also omits conjunction “wa” which means “and”. Both forms are generally acceptable and a matter preferrence by the different schools of Sunni Jurisprudence.

TRADITION OF RECITING TAKBEER ON WAY TO MASJID FOR EID PRAYER

An Even Longer Version Of Takbeer E-Tashreeq:
There is no one single right takbeer for Eid as the subject matter is broad. The command from the Quran is to say takbeer in general, i.e. to venerate Allah. He did not specify one particular form of takbeeraat. In the end, it will be the preference your local masjid. Likely to be the one that is easy for all adult and children to recite in congregation. This is also a common takbeer which is recited during Eid.

La illaha il Allah
there is no God, but Allah

Walilahil Hamd
to Him belongs all Praise

Walhamdulillahi kathira
And all Praise is due to Him

Bukratan wa asila
eventide and in the morning

La illaha il Allah
there is no God, but Allah the Unique

Sadaqa wa’dah
He has fulfilled His Promise

Wa nasara abda
and made Victorious His servant

La illaha il Allah
there is no God, But Allah

Walau karihal-Kafirun
even though the idolaters hate it

Allahumma salli ala Sayyidina Muhammad
O Allah, have Mercy on our Prophet Muhammad

Wa sallim tasleeman katheera
and Bestow upon them much peace.

How To Pray Eid-ul-Adha

Based on Hanafi School of Islamic fiqh

Eid prayer consists of two units (Rakat in Arabic, singular is Raka). The main difference in the way this prayer and any other prayer of two Rakat is performed is the number of Takbirs that are done.

Make an intention of doing two Rakat behind the Imam for Eid prayer along with six additional Takbirs.

Do not get up right away. The Imam will give a short Khutbah (speech). Please stay still and listen. It is recommended to do so.

Tashrik Takbir starts in the arafa day (the day before Eid – eve of eid) in the Morning Prayer (fajr prayer) until the asr prayer (afternoon prayer) of the fourth day of eid. It is done after the fard prayers. And at the end of each twenty-three obligatory (fard) prayers that take place from the morning at the eve of the eid to the afternoon prayer of the fourth day it is necessary to say it.