There are six extra Takbeers in Eid Namaz

Three before Qira’at (recitation) and after Takbeer-e-Tahrima in the first Rak’at and
Three after Qira’at in the second Rakat and before the Takbeer for Ruku.

1) Make intention for Eid-ul-Adha for two Rakats Wajib  as above and then lift your hands up to your ears and say ‘Allahu Akbar’ and then fold them below the navel as normal.

4) After folding your hands after the fourth Takbeer the Imam will silently recite ‘A’udhubillah’ and ‘Bismillah’ and then he will pray Surah al-Fatiha (‘Alhamd Sharif’) and a Surat loudly and then go into Ruku and Sijdah and (thus,) complete one Rak’at (unit).

5) Then in the second Rak’at the Imam will first pray the Alhamdu and a Surat then lift your hands to your ears and say Allahu Akbar and release them; and do not fold them and repeat this twice. Therefore a total of three times the Takbeer shall be said. On the fourth time say Allahu Akbar and without lifting your hands go into Ruku. 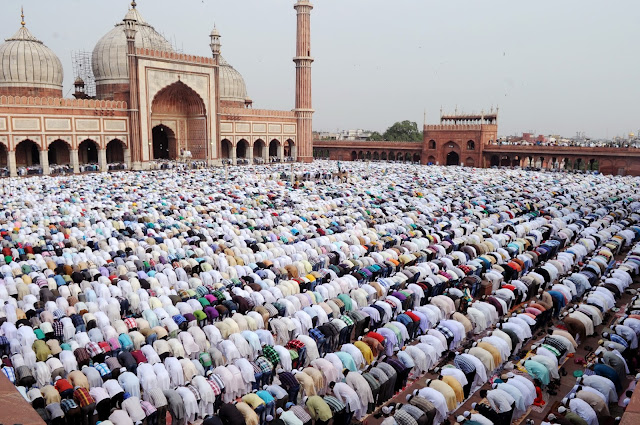 1. To rise early in the morning.
2. Take a full bath.
3. Clean the teeth.
4. Wear the best cloths that he had.
5. Wear perfume.
6. To eat something sweet like dates before leaving home.
7. Go to the Eid prayer location very early. (The Prophet use to offer Eid prayer in the central location, that is not to offer it in a mosque of a locality without any legitimate excuse).
8. The Prophet used to go to the Eid Prayer location by one route and will return through another route.
9. He used to go for Eid on foot.
10. He used to chant slowly on the way to the Eid prayer location the following words: “Allahu Akbar, Allahu Akbar, Laa ilaaha illallahu Wallahu Akbar, Allahu Akbar, Wa lillahil Hamd.” (Translation: Allah is the greatest, He is the greatest. There is no god except Allah. He is the greatest. All praises and thanks are for Him)
11. The Prophet used to give Sadqa-e-Fitr (zakatul fitr) for before the Eid day. But if you have not done so please give now before the Eid.

It is not permissible for females to perform the Eidain prayers, as there shall be mixing between the men and the women in the Eidgah (place where the Eid prayer is performed). This is why it is not permissible for females to go to the Masajid to perform salaah with congregation; whether they go in day or at night; whether for Jum’ah or for Eidain; whether they are old or young. [This has been stated in Tanwir al-Absar and al-Durr al-Mukhtar Page 114]

Yes, however, before Zawal women can perform the 2 or 4 rak’ats Chasht (Salatud Duha) prayer at home, after the Eidain prayer has finished. [Bahar-e-Shari’at – Vol. 1, Chapter 4, Page 94]

3. If only the women have their own congregation for salaah, then this is also not permissible, as the congregation held by women between themselves (to perform salaah) is not allowed, in fact it is strictly disliked (Makruh-e-Tehrimi). [This has been stated in Fatawa-e-’Alamgiri Vol. 1 Page 80, also in al-Durr al-Mukhtar Page 77]

4. Even if women pray the Eidain prayer on their own, then this is also not permissible as it is a condition to establish the Eidain prayer that it is performed with a congregation. Yes! Women should pray the nafl (supererogatory) salaah on that day; at home, on their own. Insha’Allah they shall receive the blessings and rewards of that day.

2. If a person joins the Eid salaah after the Imam has completed the extra Takbirs then he should recite the Takbir of Tahrimah and immediately, the additional Takbirs, dropping the hands between the first two additional Takbirs and clasping them after the third, making sure that the hands are raised to the ears on each Takbir.

3. Since the condition of Eid salaah is the formation of a jama’ah, a person who missed Eid salaah is unable to perform the salaah on his own. There is no Qadha for Eid salaah.

4. A person who joins the Eid salaah after the Imam has already recited the Eid Takbir should recite the Takbir immediately upon entering the salaah. However, if he enters the salaah when the Imam is about to go into Ruku and he (the late-comer) fears that he will not be able to join the Imam in the Ruku if he stands and recites the Takbir, then he should instead recite the Takbir in the Ruku, and forgo the tasbih of the Ruku but, while reciting the Takbir in Ruku the hands should not be raised as is done when reciting the Takbir when in Qiyam (the standing posture of salaah). If the Imam emerges from the Ruku and the latecomer has not yet completed the recitation of his Takbir which he had missed then he should leave off the balance of the Takbir and join the Imam. In this case the balance of the Takbir which he could not complete are waived.

5. If someone missed a Rak’ah of the Eid Salaah, he should fulfil it as follows: After the Imam completes the salaah, he (the one who missed the Rak’ah) should rise and perform one Raka’h on his own, reciting Qira’ah (Surah Al-Fatiha plus a Surah) first, followed by the Takbirs. The rest of the Rak’ah is then completed as usual.

How to perform Eid ul-Adha prayer?

Eid is a special occasion and one of the things which makes it so is the Eid-ul-Adha congregational prayer. Eid Salat (prayer) consist of two rakats with six takbeers in congregation of Muslims followed by the Khutba of Eid.

How to Offer Eid-ul-Adha Salat