Millions of Muslims across the world have begun celebrating the three-day Eid-al-Adha, Baqreid, or Id-ul-Zuha. One of the most important festivals in Islam, Eid-al-Adha takes place after the end of Haj, the annual pilgrimage to Mecca, and commemorates Prophet Ibrahim’s willingness to give up his beloved son on Allah’s command.

Since the time of Prophet Mohammad, Muslims have sacrificed animals (qurbaani) on the day to honour Ibrahim’s spirit of sacrifice.

Eid-al-Adha is, however, not about shedding blood to please God. It’s about giving up something you hold dear in devotion to God. It’s also mandatory to share the meat of the sacrificed animal, in three equal parts –for yourself, for family and friends, and for the poor.

The festival has a clear message of piety, charity as well as equality. The Quran states: “Their meat will not reach Allah, nor will their blood, but what reaches Him is piety from you.” (22:37).

It is recounted in Quran that Allah appeared to Prophet Ibrahim in a dream and commanded him to sacrifice his most dear possession as an act of obedience and submission. The father blindfolded his son, Ismail, who readily agreed for the sacrifice, and slit his throat. However, when Ibrahim opened his eyes, he saw Ismail was alive, and an animal had been killed instead.

A version of the story is also found in the Old Testament and the Torah.

Many Muslims buy animals, rear them with love, and then offer them to God, so as to feel the pain of Prophet Ibrahim.

Islam, however, recognises that it’s not possible for every Muslim to actually rear an animal himself. Such people can empower others to perform the sacrifice on their behalf, and pay for it.

Sacrificing on Eid-al-Adha is mandatory in Islam only for those who can afford it. They have to give a third of the meat to the poor and the needy. The festival ensures that even those who can’t afford meat get plenty of it at least once a year. In Mecca, the meat of the animals slaughtered by the Haajis is distributed to third-world countries too.
In fact, charity is clearly codified in Islam – one-third of the meat during Eid-Al-Adha, and a portion of your earning as zakat on other days.

Because the sharing is mandated in the religion, the poor can accept it with dignity. There’s nothing demeaning about accepting the meat (or money as zakat) as the one taking it is only helping the giver fulfil his obligations to God.

The unwarranted criticism of the festival

The sacrifice of animals during EId-al-Adha has often been questioned, more so in recent times.The festival reminds us that though we kill animals for food, it’s only to fulfil the most basic of human needs, and is never a wanton act of violence.

Eating meat is in no way exclusive to Muslims and is prevalent across the world. Vegetarianism is a choice, not a marker of morality. In many countries, the soil and the climate are such that it’s impossible to survive without meat. Also, meat is a much cheaper source of nutrition, and not everyone can afford vegetarian alternatives.

Animal sacrifice is not exclusive to Islam either. In Hinduism, animal sacrifice is an essential ritual in the worship of many deities — Kali, Bhairav — and for many purposes — to please, to propitiate, to appease.

Yet, questions over the morality of meat-eating surface with renewed vigour during Eid-al-Adha. One cannot be made to feel apologetic about eating meat, and when the burden of guilt is sought to be put more over one community than others — especially in India — it is clear that the motivation is not love for animals.

Which animals can be sacrificed on Eid ul Adha

The event of Eid ul Azha is incomplete without the Qurbani of animals. However, in this article, you will get information about animals that can be sacrificed on Eid ul Adha. 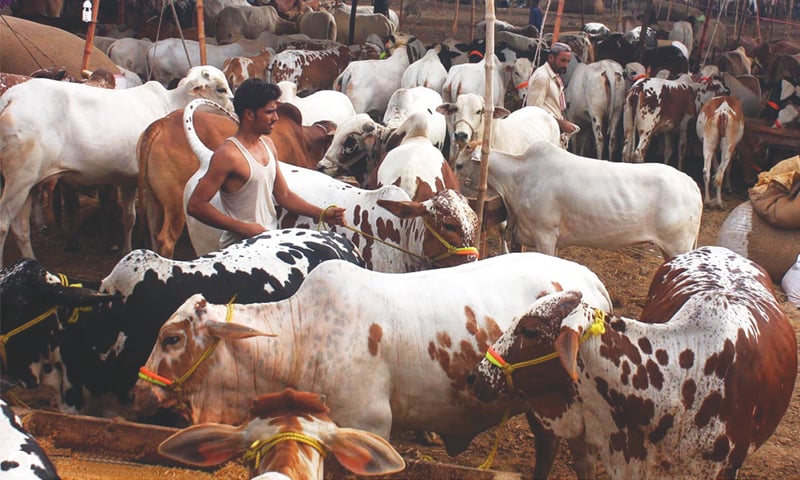 Animals that can be sacrificed on Eid ul Adha

When talking about the eligible animals, female or male ram, goat, cow, sheep, and buffalo are all permissible. In terms of age, a ram, sheep, and goat must of 1 year, a buffalo and cow of 2 years, and a camel of 5 years.

It is noted that if the animal’s age is less than this then the sacrificial is not allowed. However, animal older than this age is allowed. On the other side, if a six-month-old baby of ram or sheep is so huge that by appearance the ram or sheep looks like twelve months old then it is allowed.

Qurbani is an obligation that we are commanded to perform by Allah (SWT). Therefore, we must follow the Qurbani meat distribution rules and regulations. Below is a brief guide to the rules and recommendations of Qurbani;

We have also provided further detailed answers to some of the frequently asked questions about how Qurbani works.

Qurbani is an annual tradition for Muslims across the world and involves an animal sacrifice in recognition of the Prophet Ibrahim’s (AS) own willingness to sacrifice his son for the will of Allah (SWT). At the last moment, Allah (SWT) replaced Ibrahim’s (AS) son with a ram, saving his life and rewarding Ibrahim’s (AS) devotion. That is why Muslims give Qurbani and in doing so, we also help impoverished families and communities receive their share.

Who Must Perform Qurbani?

Every Muslim must perform Qurbani. The only exceptions are as follows:

You are permitted to donate Qurbani on behalf of other people, including those who have passed away; however, you are not expected to provide Qurbani animals on behalf of your adult children who can pay their own share.

Of those who it is required of, Qurbani rules for cutting hair and nails stipulate that one should refrain from doing so until after the sacrifice has been made.

At What Age is Qurbani Fard?

Whether Qurbani is compulsory differs between different schools of thought; however, for the greater good of those less fortunate, Qurbani should be considered Fard for anyone who has reached the age of puberty and who possesses the Nisab value.

Who Can Receive Qurbani Meat?

Meat from Qurbani animals should be distributed equally in three parts. It should be given to the family, friends and the poor (both Muslim and non-Muslim alike). If you perform Qurbani with a partner/partners, the meat should be shared by weight, not by approximation. You cannot pay the butcher with the meat, fat and by-products of the slaughtered animal. The skin can be kept for personal use, but if it is sold, the amount must be given to the poor.

How Many Qurbani Per Family?

Every able Muslim should be able to give at least one Qurbani which is then divided into three shares. An example of one Qurbani is a small animal such as a sheep or goat. Larger animals such as camels, cows and buffalo can count for up to seven people’s Qurbani. The Qurbani rules for a husband and wife stipulate that they can make a joint donation, but the animal must be big enough so that each person still gives their required one share. It is common for households to donate a larger animal worth seven shares, but it is not mandatory.

When Must Qurbani Be Performed?

Qurbani must be performed on the 10th, 11th or 12th days of Dhul-Hijjah, the time of the festival of Eid ul-Adha. Eid ul-Adha, also known as the Greater Eid, Bakra Eid and Qurbani Eid changes in the Gregorian calendar each year. Eid ul-Adha 2021 and Qurbani preparations are anticipated to start on Tuesday 20th July, ending on Friday 23rd July 2021, depending on the sighting of the moon. The time for Qurbani must be performed as close to the completion of Eid Salah as possible and not before. Any sacrifice carried out before Eid Salah is considered Sadaqah.

When Must Qurbani Animals Be Purchased?

Qurbani animals should be purchased a few days before the sacrifice. They must be properly fed and well cared for in the intervening days.

Which Animals Can Be Sacrificed?

The animals which are eligible should meet minimum requirements, such as the age of the animal for Qurbani and their condition, including:

In addition, all animals must be healthy and free of disease, including the following conditions:

How Should Qurbani Animals Be Sacrificed?

To fulfil the rules of the Qurbani festival, slaughterers and slaughter-houses should abide by the following regulations:

It is best to slaughter the animal yourself, but if you do not know how, you should remain present whilst someone else sacrifices the creature. It is also necessary to say “Bismillahi Allahu Akbar” when slaughtering the animal. Slaughtered animals are not to be skinned until completely cold.

How To Pay Qurbani?

In the UK, animal slaughter can only be carried out by recognised and registered slaughterhouses but Muslim Aid has made it easy for you to pay your Qurbani directly to us.

Our UK Qurbani supports those in need in the UK who have had to rely on food banks and donations to keep their family afloat, donate with Muslim Aid and receive two thirds direct to you while our teams deliver the remaining third to those in need.

You can also donate Qurbani to Need is Greatest which ensures fresh meat is distributed to the communities facing the most hardships in areas of conflict and poverty. Our teams are on the ground in the Aworst affected countries, getting food parcels and Qurbani shares to isolated communities or those caught in high-risk zones.

This Eid-al-Adha, may we all learn to sacrifice, and to share. Happy Eid-al-Adha to all.