First Reading
Acts of the Apostles 10:34a,37-43
Peter preaches about Jesus’ life, death, and resurrection.

Second Reading
Colossians 3:1-4 or 1 Corinthians 5:6b-8
Colossians: Having been raised by Christ, be concerned with what is above.
1 Corinthians: Let us celebrate this feast with new yeast.

Gospel Reading
John 20:1-9
Mary of Magdala finds that the stone has been removed from Jesus’ tomb.

Background on the Gospel Reading

Today we begin the Easter Season, our 50-day meditation on the mystery of Christ’s Resurrection. Our Gospel today tells us about the disciples’ discovery of the empty tomb. It concludes by telling us that they did not yet understand that Jesus had risen from the dead. Thus, the details provided are not necessarily meant to offer proof of the Resurrection. The details invite us to reflect upon a most amazing gift, that is faith in Jesus and his Resurrection.

Each of the four Gospels tells us that Jesus’ empty tomb was first discovered by women. This is notable because in first-century Jewish society women could not serve as legal witnesses. In the case of John’s Gospel, the only woman attending the tomb is Mary of Magdala. Unlike the Synoptic accounts, John’s Gospel does not describe an appearance of angels at the tomb. Instead, Mary is simply said to have observed that the stone that had sealed the tomb had been moved, and she runs to alert Simon Peter and the beloved disciple. Her statement to them is telling. She assumes that Jesus’ body has been removed, perhaps stolen. She does not consider that Jesus has been raised from the dead.

The Gospel passage concludes, however, that even having seen the empty tomb and the burial cloths, the disciples do not yet understand about the Resurrection. In the passage that follows, Mary of Magdala meets Jesus but mistakes him for the gardener. In the weeks ahead, the Gospel readings from our liturgy will show us how the disciples came to believe in Jesus’ Resurrection through his appearances to them. Our Easter faith is based on their witness to both the empty tomb and their continuing relationship with Jesus—in his appearances and in his gift of the Holy Spirit. 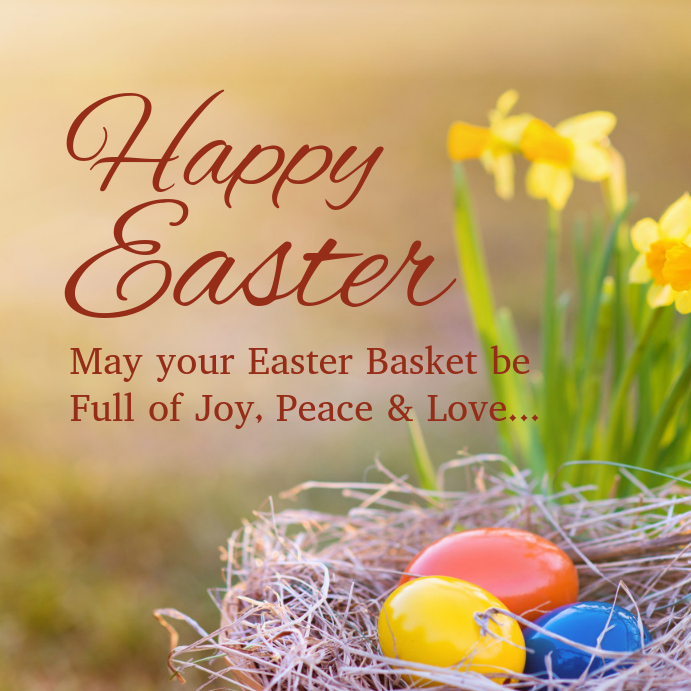 Peter proceeded to speak and said:
“You know what has happened all over Judea,
beginning in Galilee after the baptism
that John preached,
how God anointed Jesus of Nazareth
with the Holy Spirit and power.
He went about doing good
and healing all those oppressed by the devil,
for God was with him.
We are witnesses of all that he did
both in the country of the Jews and in Jerusalem.
They put him to death by hanging him on a tree.
This man God raised on the third day and granted that he be visible,
not to all the people, but to us,
the witnesses chosen by God in advance,
who ate and drank with him after he rose from the dead.
He commissioned us to preach to the people
and testify that he is the one appointed by God
as judge of the living and the dead.
To him all the prophets bear witness,
that everyone who believes in him
will receive forgiveness of sins through his name.”

Brothers and sisters:
If then you were raised with Christ, seek what is above,
where Christ is seated at the right hand of God.
Think of what is above, not of what is on earth.
For you have died, and your life is hidden with Christ in God.
When Christ your life appears,
then you too will appear with him in glory.

Brothers and sisters:
Do you not know that a little yeast leavens all the dough?
Clear out the old yeast,
so that you may become a fresh batch of dough,
inasmuch as you are unleavened.
For our paschal lamb, Christ, has been sacrificed.
Therefore, let us celebrate the feast,
not with the old yeast, the yeast of malice and wickedness,
but with the unleavened bread of sincerity and truth.

Christians, to the Paschal Victim
Offer your thankful praises!
A Lamb the sheep redeems;
Christ, who only is sinless,
Reconciles sinners to the Father.
Death and life have contended in that combat stupendous:
The Prince of life, who died, reigns immortal.
Speak, Mary, declaring
What you saw, wayfaring.
“The tomb of Christ, who is living,
The glory of Jesus’ resurrection;
Bright angels attesting,
The shroud and napkin resting.
Yes, Christ my hope is arisen;
to Galilee he goes before you.”
Christ indeed from death is risen, our new life obtaining.
Have mercy, victor King, ever reigning!
Amen. Alleluia.

O God, who for our redemption gave your only-begotten Son to the death of the cross, and by his glorious resurrection delivered us from the power of our enemy: Grant us so to die daily to sin, that we may evermore live with him in the joy of his resurrection; through Jesus Christ your Son our Lord, who lives and reigns with you and the Holy Spirit, one God, now and for ever. Amen.

6On this mountain the Lord of hosts will make for all peoples a feast of rich food, a feast of well-aged wines, of rich food filled with marrow, of well-aged wines strained clear. 7And he will destroy on this mountain the shroud that is cast over all peoples, the sheet that is spread over all nations; he will swallow up death forever. 8Then the Lord God will wipe away the tears from all faces, and the disgrace of his people he will take away from all the earth, for the Lord has spoken.

9It will be said on that day, Lo, this is our God; we have waited for him, so that he might save us. This is the Lord for whom we have waited; let us be glad and rejoice in his salvation.

1 Hallelujah!
When Israel came out of Egypt, *
the house of Jacob from a people of strange speech,
2 Judah became God’s sanctuary *
and Israel his dominion.
3 The sea beheld it and fled; *
Jordan turned and went back.
4 The mountains skipped like rams, *
and the little hills like young sheep.
5 What ailed you, O sea, that you fled? *
O Jordan, that you turned back?
6 You mountains, that you skipped like rams? *
you little hills like young sheep?
7 Tremble, O earth, at the presence of the Lord, *
at the presence of the God of Jacob,
8 Who turned the hard rock into a pool of water *
and flint-stone into a flowing spring.

6Do you not know that a little yeast leavens the whole batch of dough?

7Clean out the old yeast so that you may be a new batch, as you really are unleavened. For our paschal lamb, Christ, has been sacrificed.8Therefore, let us celebrate the festival, not with the old yeast, the yeast of malice and evil, but with the unleavened bread of sincerity and truth.

13Now on that same day two of them were going to a village called Emmaus, about seven miles from Jerusalem, 14and talking with each other about all these things that had happened. 15While they were talking and discussing, Jesus himself came near and went with them, 16but their eyes were kept from recognizing him. 17And he said to them, “What are you discussing with each other while you walk along?” They stood still, looking sad. 18Then one of them, whose name was Cleopas, answered him, “Are you the only stranger in Jerusalem who does not know the things that have taken place there in these days?” 19He asked them, “What things?” They replied, “The things about Jesus of Nazareth, who was a prophet mighty in deed and word before God and all the people,20and how our chief priests and leaders handed him over to be condemned to death and crucified him. 21But we had hoped that he was the one to redeem Israel. Yes, and besides all this, it is now the third day since these things took place. 22Moreover, some women of our group astounded us. They were at the tomb early this morning, 23and when they did not find his body there, they came back and told us that they had indeed seen a vision of angels who said that he was alive. 24Some of those who were with us went to the tomb and found it just as the women had said; but they did not see him.” 25Then he said to them, “Oh, how foolish you are, and how slow of heart to believe all that the prophets have declared! 26Was it not necessary that the Messiah should suffer these things and then enter into his glory?” 27Then beginning with Moses and all the prophets, he interpreted to them the things about himself in all the scriptures. 28As they came near the village to which they were going, he walked ahead as if he were going on. 29But they urged him strongly, saying, “Stay with us, because it is almost evening and the day is now nearly over.” So he went in to stay with them. 30When he was at the table with them, he took bread, blessed and broke it, and gave it to them. 31Then their eyes were opened, and they recognized him; and he vanished from their sight. 32They said to each other, “Were not our hearts burning within us while he was talking to us on the road, while he was opening the scriptures to us?” 33That same hour they got up and returned to Jerusalem; and they found the eleven and their companions gathered together. 34They were saying, “The Lord has risen indeed, and he has appeared to Simon!” 35Then they told what had happened on the road, and how he had been made known to them in the breaking of the bread.

36While they were talking about this, Jesus himself stood among them and said to them, “Peace be with you.” 37They were startled and terrified, and thought that they were seeing a ghost. 38He said to them, “Why are you frightened, and why do doubts arise in your hearts? 39Look at my hands and my feet; see that it is I myself. Touch me and see; for a ghost does not have flesh and bones as you see that I have.” 40And when he had said this, he showed them his hands and his feet. 41While in their joy they were disbelieving and still wondering, he said to them, “Have you anything here to eat?” 42They gave him a piece of broiled fish, 43and he took it and ate in their presence. 44Then he said to them, “These are my words that I spoke to you while I was still with you—that everything written about me in the law of Moses, the prophets, and the psalms must be fulfilled.” 45Then he opened their minds to understand the scriptures,46and he said to them, “Thus it is written, that the Messiah is to suffer and to rise from the dead on the third day, 47and that repentance and forgiveness of sins is to be proclaimed in his name to all nations, beginning from Jerusalem. 48You are witnesses of these things. 49And see, I am sending upon you what my Father promised; so stay here in the city until you have been clothed with power from on high.”