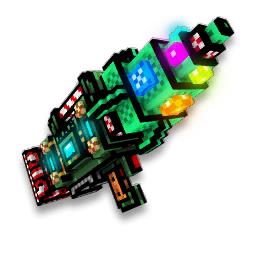 The Christmas Ultimatum, commonly abbreviated as “CU” or “X-mas Ult”, is a Heavy weapon introduced in the 13.1.0 update.

It is a Christmas themed rocket launcher that shoots a small Christmas tree that when comes in contact with something, explodes into multiple smaller explosions. At max Efficiency, it is capable of one-shotting max armored opponents when combined with the cluster bombs attribute. Its fire rate is slow and it has a mediocre capacity and very low mobility.

The weapon takes the form of an RPG-style rocket launcher.

This weapon is mostly green and has candy cane colors that breach in the back of the weapon and on the top of the body. The body of the weapon is mainly green, with several electronic parts and wires on the side of the body. On the bottom of the weapon, it has a handle that is made of wood with a red trigger, and a grey shoulder rest behind the handle.

Its rocket takes the form of a Christmas tree with purple and yellow lights. The rocket itself creates clusters of secondary explosions upon impact.

Despite being a big rocket launcher, the weapon is mounted on the player’s shoulder and held up with its right hand. It shoots small Christmas trees that explode into more tiny explosions on impact. The rocket’s speed without the Jet Fuel is still rather fast and can catch players off guard if they aren’t prepared for its speed.

On impact, the Cluster Bombs spread out far enough to catch enemies who attempt to run away from the explosions. Even when the rocket hits a a player mid-air, its Cluster Bombs will be able to kill the enemy player when they fall to them.

When the player reloads, it takes out the Christmas tree in the launcher and stuffs it in the hole with another one. It has no delay mechanics.

This weapon is undoubtedly one of the most popular weapons in the game. When accessible to many players, many players would want to buy it. It is often loved and wanted by many players, but others dislike it due to its performance and/or its popularity. Some people like this weapon for its very high damage