Christmas Rocks State Nature Preserve It had been a good hike so far. During the past several miles, we had enjoyed seeing rocky outcroppings, mature trees, and carpets of ferns. As we climbed a steep hill toward the top of the ridgeline, the trail widened and grew brighter. Distant buzzards soared effortlessly in the bright, blue sky. We found ourselves standing on a rocky cliff. A few hundred feet below, forest stretched out to the horizon. It sounds a bit like the Hocking Hills, doesn’t it? But it wasn’t. It was Christmas Rocks.

Christmas Rocks sounds like the name of an album of holiday music. Instead it is a spectacular 554 acre nature preserve in Fairfield county. Until quite recently it was accessible by permit only. The Ohio Department of Natural Resources (ODNR) has removed that restriction, and now it is open to the public … if you can find it. There isn’t much online information about Christmas Rocks, but we’re attempting to remedy that.

The entrance to Christmas Rocks State Nature Preserve is a nondescript gravel road with a brown wooden sign announcing the preserve and a bit farther down the road, a small kiosk. As you walk down the road, a small stream (Arney Run) is to your right. The road parallels the stream, slowly climbing. Follow the road, ignoring all the small side roads on the left side. The road continues to climb, above the stream which will be in a valley to your right. You will eventually see another kiosk with more trail information. The road will turn from gravel into a mown grass path. Continue onward. 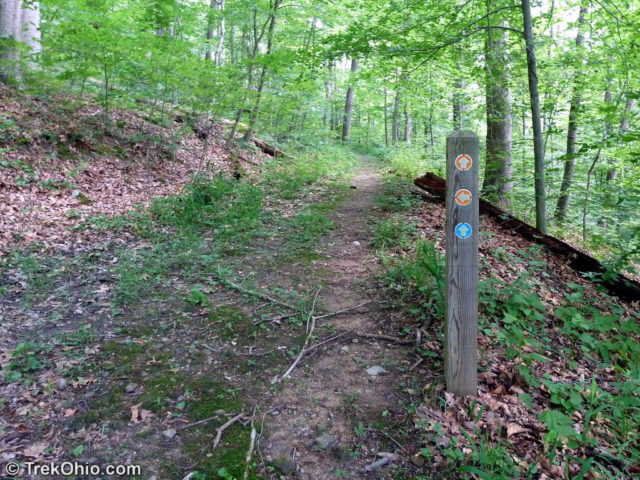 The Christmas Rocks trail takes you through mature forest with several large rock outcroppings, fern-edged trails, and hills. It also leads across ridgelines. It is very pretty countryside.

The Jacob’s Ladder trail is very similar, except towards the end of the loop, you find yourself standing on a cliff looking towards the southwest over the heavily forested Hocking Hills in the distance. It is a spectacular view. According to the Fairfield County Visitors and Convention Center, from this point to the base of the cliff is a 100-foot sheer drop (30.5 meters). From the top of the cliff to the creek in the valley below is 300 feet (91.4 meters).

The trail lead back to the main path and from there we walked back to the park entrance. We walked both loop trails and returned to our starting point, a total distance of 4.75 miles.

I spoke by phone to Jeffrey Johnson, the SE Preserve Manager for ODNR and confirmed that even though you will see old “permit only” signs as you enter the preserve, a permit is no longer required. However the ODNR is doing an experiment by opening Christmas Rocks Nature Preserve to the general public. If it looks like the hikers are harming this fragile habitat, ODNR will re-institute the permit policy.

About the name, “Christmas Rocks”

The early settlers are responsible for the name, “Christmas Rocks.” Mr Johnson was kind enough to share two theories as to why they may have chosen this particular name.

Christmas Florida Christmas Florida If you’re in Central Florida, Christmas — the census-designated place — is down the road, too. To be slightly more exact, it’s about 17 miles west of downtown Titusville on State Road 50, in Orange County. And if you’re looking for the spirit of the season, you might just find it here, the only Christmas in […]

The Nightmare Before Christmas Quotes