The Champ-de-Mars Christmas Village at Champ-de-Mars and Quai Branly offers Parisians and tourists alike the opportunity to soak up a little Christmas spirit. Visit the 120 chalets for a wide selection of gifts, treats and decorations for the holiday season.

Not to be missed is the outdoor ice skating rink. Nothing is more romantic than skating hand-in-hand at dusk as the Eiffel Tower twinkles near by.

The former Champs-Elysées Christmas Market that stretched from the Arc de Triomphe to the Place du Concorde was cancelled in 2017 after a dispute between the organizer and the city of Paris. But it was re-imagined starting in 2018 as the Tuileries Garden Christmas Market with more than 100 chalets set up in the Tuileries Garden next to the Louvre.

It’s not Paris’ biggest Christmas Market and not to be missed when visiting Paris at Christmastime. Santa himself will make an appearance to delight the young and old alike.

Another of Paris’ biggest Christmas Markets, La Défense has more than 350 chalets with artisans from all over France selling their wares spread over 13,000 square meters. This year’s theme also features a massive globe and 18 meter tall Christmas tree.

Energy saving LED lights illuminate immersive light displays created especially for Paris La Défense. Like Christmas magic, they switch on and off as you walk past leaving visitors feeling like the experience was created for them personally.

Away from the crowds of the Champs-Elysées and a favorite Parisian neighborhood of many Paris insiders, a Christmas Market has appeared alongside the church of Saint Germain des Prés since 1999. The small, but quaint Christmas Market again returns with merchants delight visitors with a selection of French crafts and gastronomic specialties.

While many streets in each arrondissement are decorated, the Champs-Elysées is one of the most popular and festive of the Parisian light displays. The most beautiful avenue in the world transforms into a Christmas wonderland with lights.

Don’t miss Galeries Lafayette for holiday lights and windows that arguably rival those of New York City department stores. Every year the theme changes. and past themes have included classic American musicals.

There’s not a more mesmerizing sight than window displays with with animated scenes like the Radio City Rockettes dolls wearing Santa suits, gold clogs and red tams or bathing suit clad teddy bears with snorkels and fins dancing away to the tunes of Mamma Mia. No matter what the year’s theme, Galeries Lafayette knows how to enchant window shoppers from near and far..

It’s “A Very Curious Christmas” at Printemps Paris Haussmann this year! The French department store known for its selection of beauty, fashion and accessories has created a magical world with amazing animals with contagious energy.

Le BHV Marais department store transports Parisians and visitors alike to the Christmas Capital of France with their Strasbourg themed Christmas window displays this year. Strasbourg knows Christmas; they’ve been putting on a Christkindelsmärik since 1570. And this year Strasbourg has teamed up with Le BHV Marais with a mini version of the famous Strasbourg Christmas Market enchanting in the store’s windows.

The rooftop of Paris La Défense’s Grande Arche gives visitors a 360-degree view of some of Paris’ most beautiful monuments. Worth a visit for the panoramic view anytime of the year, the Grande Arche is even more magical when the 110 meter high rooftop ice skating rink opens for the holiday season. 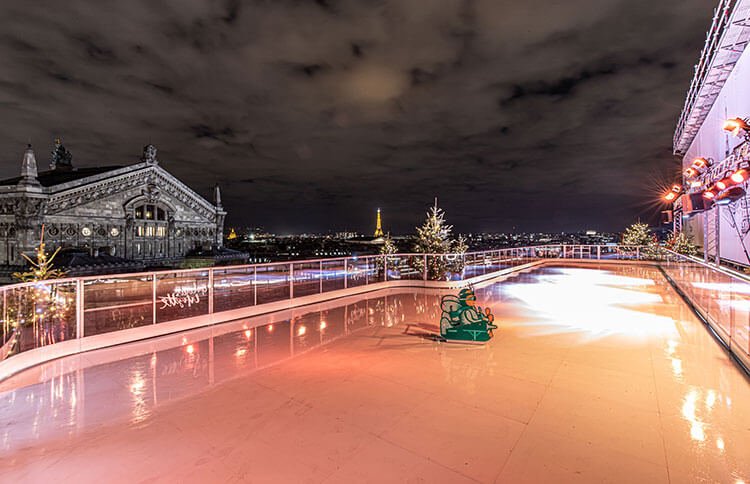