This jubilant festival is celebrated by Roman Catholics and other Christians to proclaim the truth of the transubstantiation of bread and wine into the actual body of Christ during Mass.

In some countries in the world, Catholic churches still celebrate the festival, not only with a Mass, but also with a procession that carries the consecrated wafer through the streets as a public statement that the sacrifice of Christ was for the salvation of the whole world.

In the Church of England this feast is also kept on the Thursday after Trinity Sunday and known as the Day of Thanksgiving for the Institution of Holy Communion (Corpus Christi).

It’s worth noting that Christians already mark the Last Supper, when Christ instituted the Eucharist, on Maundy Thursday (the day before Good Friday). Because Maundy Thursday falls during the solemn period of Holy Week, it was thought necessary to have a separate festival of the Eucharist that would allow the celebration not to be muted by sadness.

The main feature of Corpus Christi celebrations is the triumphant liturgical procession in which the sacred host (the wafer that has been consecrated during the Mass) is carried out of the Church “for the Christian faithful to make public profession of faith and worship of the Most Blessed Sacrament”.

The practice is no longer common in the UK, where traditional processions started to wane in the 1970s after the Second Vatican Council. Attempts have been made to revive the tradition in some UK towns and villages in recent years.

During his papacy, Pope John Paul II led an annual Corpus Christi procession from St Peter’s Square in the Vatican to the streets of Rome. Many traditional Catholics are keen for such processions to be promoted everywhere in the world in the light of the late Pope’s example.

Since, for Catholics, the host contains the real presence of Christ, it is treated as Christ in human form would be treated, with reverence, ceremony and adoration.

The host is displayed on a ‘monstrance’ and protected from the sun by a canopy.

The procession moves through local streets, either to another church, or back to the church where it began.

The Church states that

…the devout participation of the faithful in the eucharistic procession on the Solemnity of the Body and Blood of Christ is a grace from the Lord which yearly fills with joy those who take part in it. 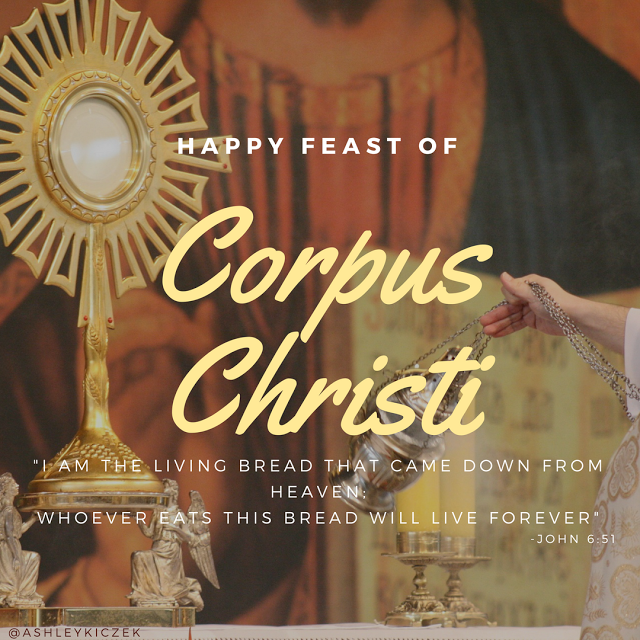 The structure of the procession is often designed to demonstrate the hierarchy of heaven in that the sacred host is followed in procession by various Church organisations carrying the banners of their patron saints.

Churches may prepare for the festival in the days before by various smaller-scale ceremonies such as the Adoration of the Sacrament, and services which explore the ‘eucharistic dimension’ of various elements of parish work.

Corpus Christi is marked by a service originally devised by Thomas Aquinas. It includes five great hymns, including Panis Angelicus (part of a longer hymn called Sacris Solemniis, ‘At this our solemn feast’):

Thus Angels’ Bread is made
the Bread of humankind today:
the Living Bread from heaven
with imaginings does away:
O wondrous gift indeed!
the poor and lowly may
upon their Lord and Master feed.

and Pange lingua (‘Sing, my tongue’):

Sing, my tongue,
The mystery of the glorious body,
And of the precious Blood,
Shed to save the world,
By the King of the nations,
The fruit of a noble womb.

In order to see this content you need to have both Javascript enabled and Flash installed. Visit BBC Webwise for full instructions

Down in adoration falling,
Lo! the sacred Host we hail,
Lo! o’er ancient forms departing
Newer rites of grace prevail;
Faith for all defects supplying,
Where the feeble senses fail.

Aquinas also wrote a powerful prayer for the festival, that encompasses many aspects of the doctrine of the Eucharist:

O God, who in this wonderful Sacrament left us a memorial of your Passion: grant, we implore you, that we may so venerate the sacred mysteries of your body and blood, as always to be conscious of the fruit of your redemption.

The festival was inspired by the religious experience of St Juliana (1193-1258), a Belgian nun, who dreamed repeatedly of the Church under a full moon with a black spot.

According to legend, the dream was interpreted to her in a vision by Christ. The moon, she said, was the Church’s calendar of festivals and the black spot was the lack of a festival to celebrate the holiest element of the Church – the Eucharist.

Juliana shared this with her local bishop, who in 1246 issued a decree for such a festival to be celebrated in his territory.

The festival was instituted throughout the Church by Pope Urban IV in 1264. Before that there had been no universal festival to mark the sacrament of the Eucharist.

Corpus Christi was made an obligatory feast for Roman Catholics by Pope Clement V in 1311 at the Council of Vienne.

Corpus Christi was celebrated in England from 1318 onwards.

In 1551, the Council of Trent described the festival as a ‘triumph over heresy’. They meant by this that when Christians celebrated the festival they affirmed their belief in the doctrine of transubstantiation, and thus the victory of the Church over those heretics who denied that the consecrated wafer became the real body of Christ during the Mass.

From the Middle Ages onwards, special Corpus Christi plays were staged to mark the occasion.

The festival took an additional meaning in Spain, since it was always attended by the secular rulers of the area. The procession in Madrid was joined by the King and/or Queen, as well as senior nobles. This symbolised the unity of the sacred and secular powers, and linked both in victory over outsiders.

Many Spanish celebrations of this feast featured choreographed performances that were militaristic in nature. Dancers often appeared as combatants: angels and demons, Samson and the Philistines, and Christians and Moors are just a few of the warring factions presented in Spanish Corpus Christi festivals. By extension, the community of Christians participating in local ritual triumphs enlisted in this global war against non-papists.

Carolyn Dean makes a further interesting point about the Spanish celebration of Corpus Christi as acting out Spain’s colonial successes:

…early in the sixteenth century Queen Isabela had the monstrance that was used in the Corpus Christi procession in Toledo crafted from the first gold to reach Spain from the Indies, also a site of conquest. 15 American gold — again, the “first gold that came from the Indies” — was also formed into a cross displayed in processions in Seville.

Thus, the conquest of the so-called New World was integrated into a known pattern of historic confrontations with non-Christian peoples.

Although Native Americans were not represented in human form as subjugated to the Body of Christ in early Spanish Corpus Christi celebrations, the wealth of their land was transformed into its supports.

We might well read a metonymic “transubstantiation” of the bodies of American natives, not yet well known, into the gold which, when fashioned into monstrances and crosses, summoned their subjected and doubly converted presence in Spanish Corpus Christi festivals.

The festival has a particular resonance for Spain and Portugal, and countries in Latin America. In Seville the festival was known as ‘the Thursday that shines greater than the sun’.

In such countries the festival is popular and elaborate. The triumphal nature of the celebration is acted out by treating the sacred host almost as if it were a military hero returning in victory from the wars – the host may be carried on a cart (representing a chariot) through crowds and beneath triumphal arches erected for the event.

Historically, the festival was accompanied by music, dancing and fireworks.