Boondock Saints Quotes: Released in 1999, “The Boondock Saints” tells the story of fraternal twins (Sean Patrick Flanery and Norman Reedus) who set off on a mission to rid Boston of gangsters who terrorize innocent citizens. Enjoy some of the most memorable quotes and sayings from the 1999 crime drama The Boondock Saints, directed by Troy Duffy, that has achieved a cult following over the years.

D’you know what I think is psycho, Roc? It’s decent men with loving families. They go home every day after work and they turn on the news. You know what they see? They see rapists, and murderers and child molesters. They’re all getting out of prison.
~ Connor, The Boondock Saints (1999).

And Shepherds we shall be For Thee my Lord, for Thee Power hath descended forth from Thy hand Our feet may swiftly carry out Thy commands. So we shall flow a river forth to Thee And teeming with souls shall it ever be. In Nomine Patri, Et Filii, Et Spiritus Sancti.
~ Murphy, The Boondock Saints (1999). 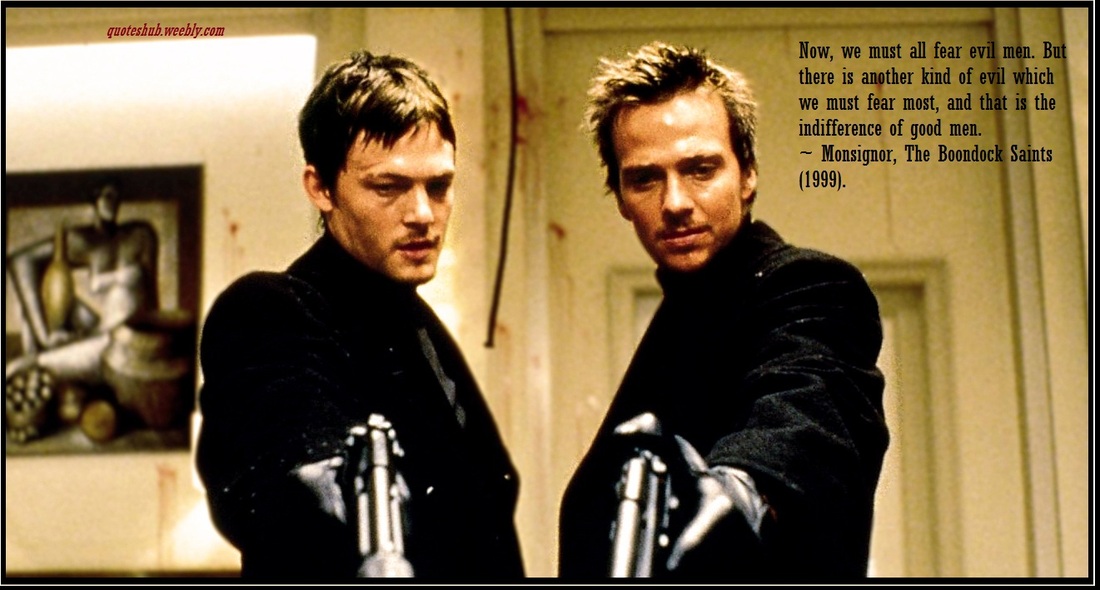 Click to enlarge image; right click on magnified image to set as WALLPAPER. (Chrome users have to save enlarged image and set it as desktop background).
Now, we must all fear evil men. But there is another kind of evil which we must fear most, and that is the indifference of good men.
~ Monsignor, The Boondock Saints (1999).Whosoever shed man’s blood, by man shall his blood be shed. For in the image of God made He man.
~ Il Duce, The Boondock Saints (1999).

Never shall innocent blood be shed, yet the blood of the wicked shall flow like a river. The Three shall spread their blackened wings and be the vengeful striking hammer of God.
~ Il Duce, The Boondock Saints (1999).

When I raise my flashing sword, and my hand takes hold on judgment, I will take vengeance upon mine enemies, and I will repay those who hate me. Oh, Lord, raise me to Thy right hand and count me among Thy saints.
~ Il Duce, The Boondock Saints (1999).And I shall count thee among my favored sheep, and you shall have the protection of all the Angels in Heaven.
~ Il Duce, The Boondock Saints (1999).

Television. Television is the explanation for this – you see this in bad television. Little assault guys creeping through the vents, coming in through the ceiling – that James Bond shit never happens in real life! Professionals don’t do that!
~ Paul Smecker, The Boondock Saints (1999).Our father, who art in heaven, hallowed be thy name. Thy kingdom come, Thy will be done, on Earth as it is in Heaven. Give us this day our daily bread, and forgive us our trespasses, as we forgive those who trespass against us. And lead us not into temptation, but deliver us from evil. For Thine is the kingdom, and the power, the glory, now and forever. Amen.
~ Mackiepenny, The Boondock Saints (1999).

A new year is a damn fine opportunity to make your friends realize that they are an indispensable part of your life. Agree or not, friends give meaning to our life and ample reasons to rejoice every moment. Friends are super special! So, the new year wishes for them also have to be super special. […]

Powerful love is indeed the best but also the worst thing that can happen to a person. It cannot even be expressed in words at all. There are a lot of wonderful things about powerful love, it is something to be celebrated. A lot of people experience powerful love and that is the way things […]

Looking for qutoes about fresh air? We have rounded up the best collection of fresh air quotes, sayings, proverbs, captions (with images and pictures) to enjoy the breeze and capture that serene feeling. A breath of fresh air on top of a mountain, a beach or in a garden can be a blessing. The fresh […]