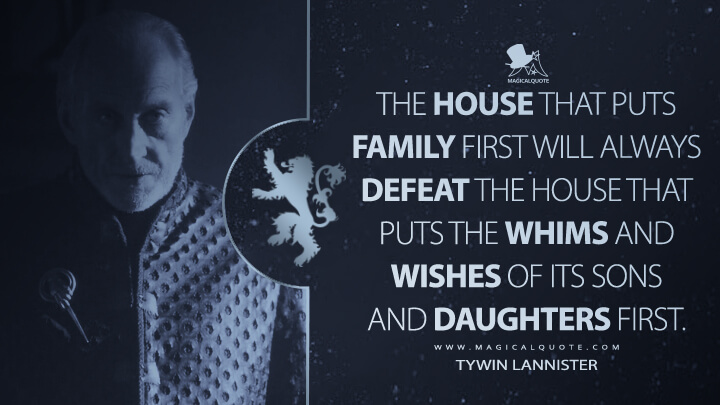 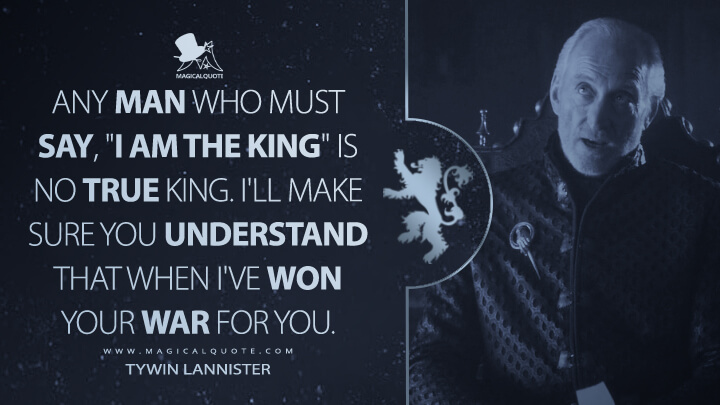 Any man who must say, “I am the king” is no true king. I’ll make sure you understand that when I’ve won your war for you. 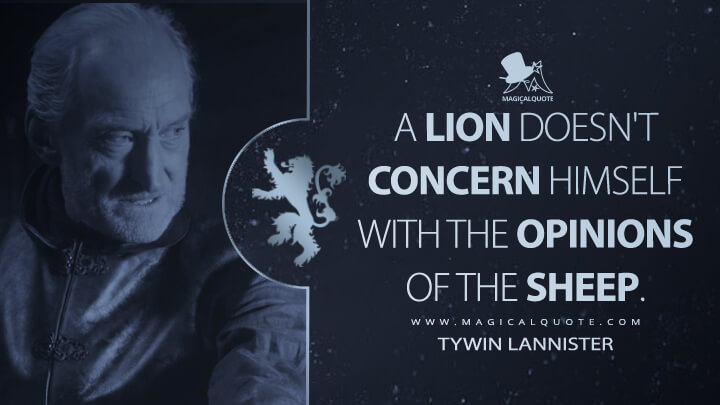 A lion doesn’t concern himself with the opinions of the sheep. 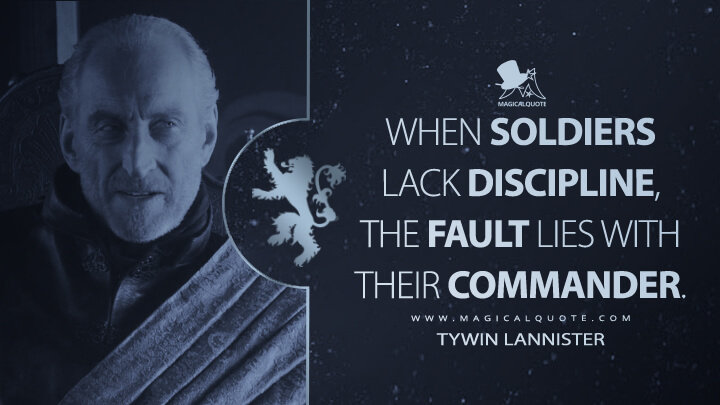 When soldiers lack discipline, the fault lies with their commander. 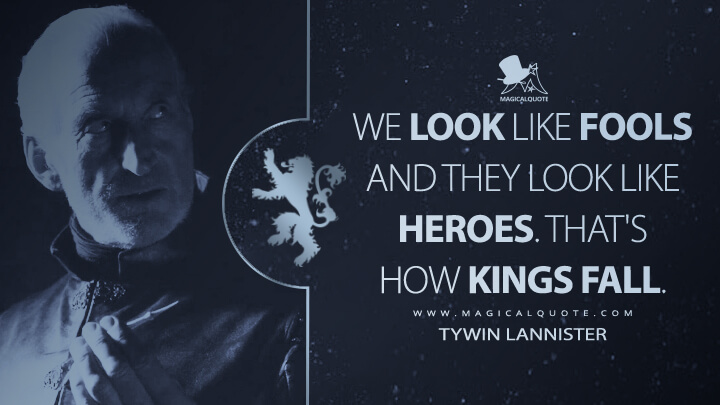 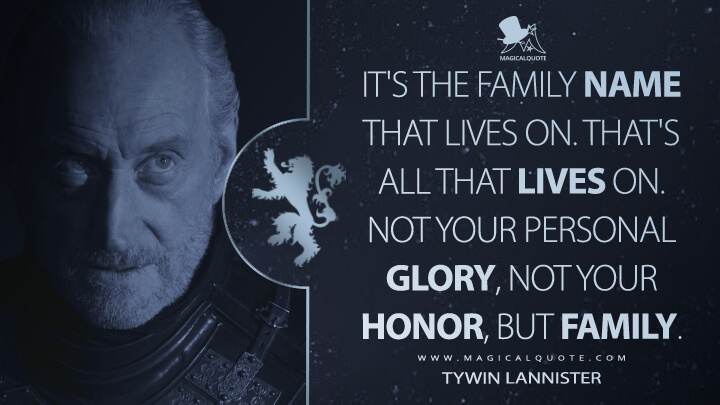 I need you to become the man you were always meant to be. Not next year. Not tomorrow. Now. 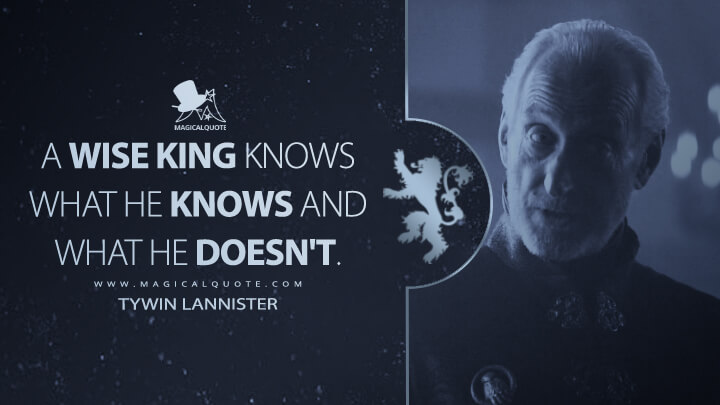 A wise king knows what he knows and what he doesn’t. 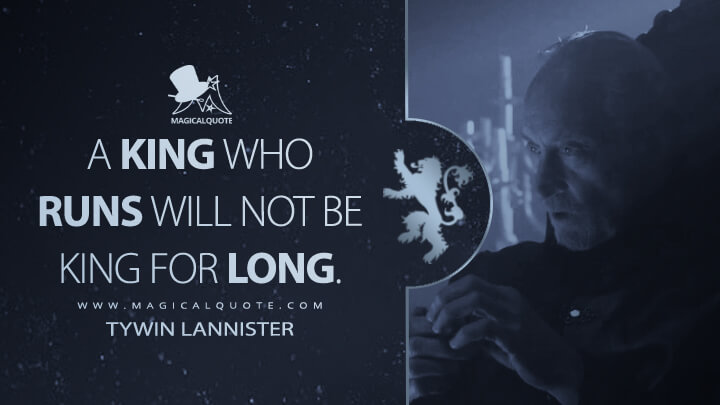 A king who runs will not be king for long.

Tywin doesn’t appear until halfway through season 1, but even when he’s not in King’s Landing his shadow hangs over the city. In the first episode, Cersei and Jaime discuss an incident when Jaime jumped off a cliff into the sea.

Jaime then offers this Tywin quote, and with just 5 words we know this man is proud, pragmatic and an involved parent.

As a master politician and general, Tywin knows all too well how easy the line between friend and enemy is to cross, and he knows how to play everyone off each other. His methods may have been a big inspiration to Little Finger, who once gave Ned Stark a similar pearl of wisdom: “We only make peace with our enemies my lord. That’s why it’s called ‘making peace’.”

8“Wars Swallow Gold Like A Pit In The Earth”

Tywin’s quotes are rarely poetic, for he’s too busy ruling a continent for such luxuries. Tywin educated his children on the fact that gold wins wars, though Cersei may have taken this too literally.

Jaime later points this out when she attempts to hold back a Targaryen conqueror and her loyal armies with an army of mercenaries, without reading the small print about the elephants.

7“I Need You To Become The Man You Were Born To Be. Not Tomorrow, Not Next Year. Now.”

We first meet Tywin when Jaime meets him in a Lannister army camp. Tywin is in the process of skinning and gutting a deer when Jaime enters and continues to do so as he lectures his son, in a memorable introduction where the explanation for the 3 Lannister siblings’ personalities suddenly hits home.

Tywin cuts straight through Jaime’s backchat and knocks the rebel without a cause down a peg or 2, before letting him know its time to grow up with this memorable quote. Jaime seemed to get the message.

6“You Really Think A Crown Gives You Power?”

Tyrion is renowned as one of the show’s most intelligent characters, but he also assumes he’s smarter than everyone else, and lacks the experience that comes with age, as well as having lived a more sheltered lifestyle than his father.

The scenes between Tyrion a.k.a Peter Dinklage and Tywin a.k.a Charles Dance are electric, and some of the show’s best scenes are simply the 2 of them talking about power, money, and war.

Another one from Tywin’s iconic opening scene where both the character and Charles Dance genuinely skinned a dead dear like a boss.

Jaime is explaining the fallout of his duel with Ned Stark, when Tywin chillingly cuts him off with the above quote, further illustrating how ruthless he is and forcing Jaime to put his imagined honor into perspective.

4“The Uncertainty Makes You Uncomfortable? Fine, Let Me Remove It For You.”

Tyrion had his moments, but Tywin’s biggest rival in terms of the war of words was sassy and sharp-as-all-seven-hells Olenna Tyrell, played expertly by Diana Rigg.

Their most memorable head-to-head comes when they meet to discuss a proposed alliance through various marriages between their children. Tywin ultimately out-maneuvers Olenna, who concedes with the line “It’s a rare enough thing: A man who lives up to his reputation”.

It cannot be denied that Tywin is a loving father to at least 2 of his 2 1/2 children. While his devotion to family seems like one of his more admirable attributes, a bi-product of this trait is his children were raised with an elitist, sociopathic view of the people around them.

But this memorable quote and one of many family mottos demonstrates exactly how Tywin built and sustains his empire, and the lesson he’s painfully trying to get through to his children.

After they gave Joffrey a crown, no-one dared question him. Even Cersei learned early on that she had lost her maternal privileges over him, and was as likely a victim as anyone if she crossed him. But Tywin proved in a small council meeting who was really in charge, dismissing the King’s rants with this quote.

Joffrey’s most admirable moment comes when he rises from his chair and belittles Tywin in front of the whole room, but the following ominous silence and stunned looks on the faces of the most powerful people in Westeros say it all…

1“We Could Arrange To Have You Carried”

Joffrey could have lived in blissful ignorance and enjoyed the illusion of ultimate power, but he had to poke the lion. Joffrey calls Tywin to the throne room and demands answers of Tywin, who asserts his dominance with every response and shows no regard for the King’s opinion.

When Joffrey raises his voice and complains about having to walk further to attend small council meetings, Tywin slowly walks up the steps until he’s towering over the boy-king, who shrinks in his throne, then calmly puts him in his place with this gem. As Tywin turns and descends the steps, he allows himself the slightest smirk.

My cupbearer can read better than you

You really think a crown gives you power?