Police brutality has been a constant issue throughout the entirety of American history. Recent cases have reinvigorated the monumental Black Lives Matter movement, whose mission is to “eradicate white supremacy and build local power to intervene in violence inflicted on Black communities by the state and vigilantes.” 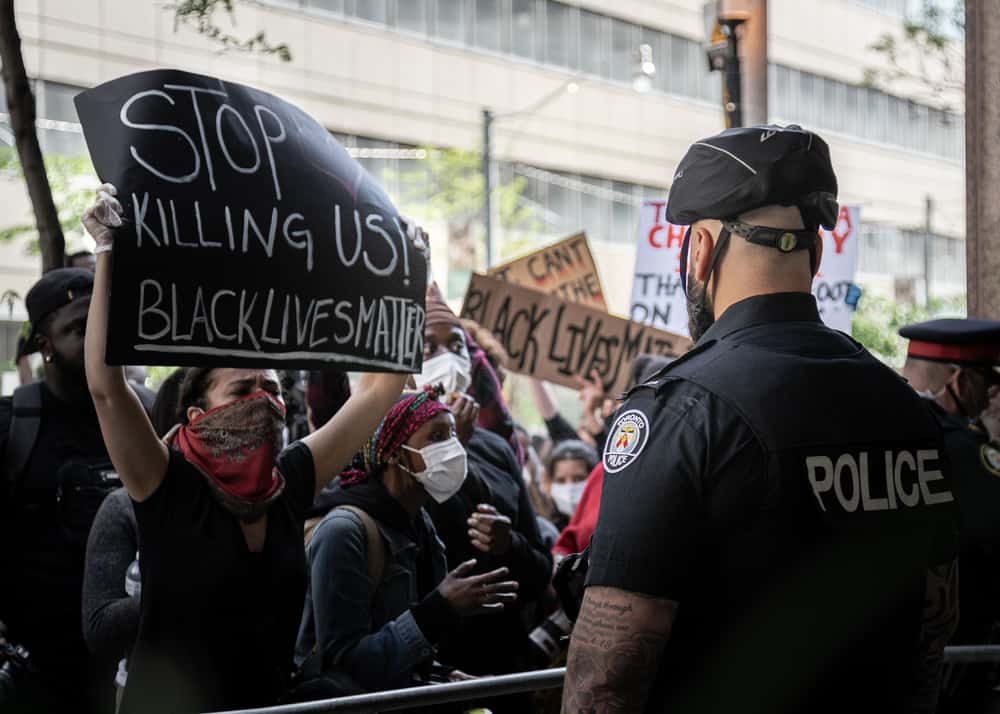 Today, our collection of quotes are from activists, politicians, celebrities, and more who have been affected by police brutality.

2. “There’s no book to figure out how not to become a victim of police brutality.” – Mike Colter

3. “If the only time you have a public opinion on civil violence in this country is when police face harm or sadly, death, then you come across as disingenuous, your intentions, suspicious, and your perspective, riddled with bias and prejudice. Empathy is not a limited resource.” — Kovie Biakolo

4. “We have seen communities cry out in pain, generation after generation, because of racism and police brutality.” – Jaime Harrison

5. “It is up to us to take a stand and demand that they ‘stop killing us,’ We’re going to stand up as a community and fight against anyone who believes that murder or any violent action by those who are sworn to protect us should consistently go unpunished.” — Beyoncé Knowles-Carter

6. “When you hear these stories about different cases of police brutality, don’t even just make that person just another hashtag, another statistic. That is somebody’s father, brother, sister, mother – be more aware of what that means.” – KiKi Layne

7. “Very few police officers are ever held accountable for even the most egregious shootings and acts of violence.” – Shaun King

9. “When you ask people to name victims of police brutality, for the most part, nobody will give you a woman’s name.” – Kimberle Williams Crenshaw

11. “A system cannot fail those it was never built to protect.” — Vann Newkirk

12. “I’m sick of watching ‘Blue Lives Matter’ supporters idly stand by any police officer simply because he wears blue, ignoring the facts that should make them cringe in disbelief and horror. Police brutality is systemic, not anecdotal.” – Seph Lawless

13. “I believe there’s a huge conflict of interest when local prosecutors investigate cases of police violence within their own communities.” – Franchesca Ramsey

14. “We loathe mass incarceration. We loathe police brutality. But most of us have absolutely no idea how to address the critical flaws in our justice system.” – Shaun King

15. “The power to prevent violence is a power that no police force seems to have anywhere in the United States.” – John Abizaid

17. “Taking on systemic racism—and rebuilding trust between police and citizens—will require contributions from us all.” – Hillary Clinton

18. “This is the problem with the United States: there’s no leadership. A leader would say, ‘Police brutality is an oxymoron. There are no brutal police. The minute you become brutal you’re no longer police.’ So, what, we’re not dealing with police. We’re dealing with a federally authorized gang.” – KRS-One

19. “The truth is that the police reflect America in all of its will and fear, and whatever we might make of this country’s criminal justice policy, it cannot be said that it was imposed by a repressive minority.” ― Ta-Nehisi Coates

20. “Most middle-class whites have no idea what it feels like to be subjected to police who are routinely suspicious, rude, belligerent, and brutal.” – Dr. Benjamin Spock

21. “I can’t bring myself to watch yet another video, not because I don’t care, but because we’re all just a few videos away from becoming completely desensitized. The public execution of Black folks will never be normal.” ― Andrena Sawyer

23. “The ruling class give carte blanche to law enforcement, who in turn press down on those most stranded by the neoliberal state, the poor– and more so, the Black poor.” – Nicolas Powers

25. “When we started making ‘Selma,’ the Black Lives Matter movement didn’t exist. The parallels between Martin Luther King staging these marches, suffering police brutality… we weren’t even aware when making the film that these sorts of things would start to happen again in 2015.” – Stephan James

26. “Now, what we’ve been doing is looking at the data and we know that police somehow manage to de-escalate, disarm and not kill white people every day. So what’s going to happen is we’re going to have equal rights and justice in our own country or we will restructure their function and ours.” – Jesse Williams

27. “Under Democratic presidents and Republican presidents, we have had for 40 years an unrelenting tide of police abuse against African Americans.” – Van Jones

28. “I am often asked what it is like to be on the ‘front line.’ But I do not use the term ‘front line’ to describe us, the protesters. Because everywhere in America, wherever we are, our blackness puts us in close proximity to police violence.” –

30. “I don’t know where we go from here because those of us who recognize the injustice are not the problem. Law enforcement, militarized and indifferent to black lives, is the problem.” – Roxane Gay

31. “If you are neutral in situations of injustice, you have chosen the side of the oppressor.” – Desmond Tutu

32. “When you believe in something, fight for it. And when you see injustice, fight harder than you’ve ever fought before.” – Brad Meltzer

33. “It is often easier to become outraged by injustice half a world away than by oppression and discrimination half a block from home.” – Carl T. Rowan

34. “Find out just what any people will quietly submit to and you have the exact measure of the injustice and wrong which will be imposed on them.” – Frederick Douglass

36. “When you see corruption, when you see injustice, you speak up. You don’t just shut up and say it’s none of my business.” – Manal al-Sharif

37. “Don’t make the mistake of thinking that you have to agree with people and their beliefs to defend them from injustice.” – Bryant H. McGill

40. “There may be times when we are powerless to prevent injustice, but there must never be a time when we fail to protest.” – Elie Wiesel

41. “It is better to protest than to accept injustice.” – Rosa Parks

42. “When an individual is protesting society’s refusal to acknowledge his dignity as a human being, his very act of protest confers dignity on him.” – Bayard Rustin

43. “To sin by silence, when they should protest, makes cowards of men.” – Ella Wheeler Wilcox

44. “How wonderful it is that nobody need wait a single moment before starting to improve the world.” ― Anne Frank

45. “To protest against injustice is the foundation of all our American democracy.” – Thurgood Marshall

46. “We run into police brutality often and it’s always a problem that we always have to protest and speak out.” – Polo G

47. “Never do anything against conscience even if the state demands it.” – Albert Einstein

48. “A single whisper can be quite a disturbance when the rest of the audience is silent.” – Anthony Marra

49. “Protesting is a fundamental aspect of our democracy, and I will always encourage this course of action, but it can be intimidating.” – Layla Moran

51. “We were unarmed, but we knew that blackness armed us, even though we had no guns.” – Ibram X

52. “Humankind seems to have an enormous capacity for savagery, for brutality, for lack of empathy, for lack of compassion.” – Annie Lennox

53. “Weakness is what brings ignorance, cheapness, racism, homophobia, desperation, cruelty, brutality, all these things that will keep a society chained to the ground, one foot nailed to the floor.” – Henry Rollins

54. “The person who is brutally honest enjoys the brutality quite as much as the honesty. Possibly more.” – Richard J. Needham

55. “I am depressed rather at the wave of brutality sweeping over the country.” – John Burns

57. “One could laugh at the world better if it didn’t mix tender kindliness with its brutality.” – D. H. Lawrence

58. “It is only our humanity that can deliver us from the brutality of our achievements.” – Henry Rollins

59. “There’s nothing but brutality and bravery or cowardice that comes out of war. That’s pretty much it.” – Michael Cimino

60. “There are so many things going on in this world that are unbelievable. A lot of gun violence and police brutality.” – Kemba Walker