The movie is based on a short story by Annie Proulx. It was directed by Ang Lee.

The film was hugely popular and it remains a symbol for lives lived under questions about social acceptability and the importance of accepting everyone for who they are. Although it lost out at the Oscars in 2006 to ‘Crash’, it was one of the most discussed movies of 2005, and the role of Ennis Del Mar in ‘Brokeback Mountain’ remains one of the late Heath Ledger’s most iconic performances.

In the film Ennis and Jack meet on Brokeback Mountain as they both get a job there as sheepherders. They get to know each other over time and their relationship grows over the course of their days in Brokeback Mountain. However, they are anxious that their love will be judged by society. The film is a beautiful telling of this touching story starring Heath Ledger as Ennis Del Mar and Jake Gyllenhaal as Jack Twist. Discover the best quotes from the film here.

2. “Jack Twist: The Pentecost… I don’t… I don’t know what the Pentecost is. I guess it means the world ends and guys like you and me march off to hell.

Ennis Del Mar: Speak for yourself. You may be a sinner, but I ain’t yet had the opportunity.”

3. “Lureen Twist: I thought Brokeback Mountain might be around where he grew up. Knowing Jack, it might be some pretend-place: where bluebirds sing and there’s a whiskey spring.

Ennis Del Mar: No ma’am we, we was herding sheep on Brokeback one summer, back in ’63.

Lureen Twist: Well, he said it was his favorite place.”

In the film, as the summer ends the two lovers part, not knowing how to handle the feelings they have for each other. Ennis settles in Wyoming with his wife and two daughters, and Jack in Texas with his wife and son. Four years later they meet each other and are confronted with the feelings they had been trying to hide. They realize that they need each other. Unsure of what to do they decide to keep their relationship alive by going on fishing trips together. They meet from time to time, but the visits become less frequent over time. Let’s look at some of the movie quotes on love from Heath Ledger, Jake Gyllenhaal and more.

4. “Jack Twist: Is there anything interesting up there in heaven?

Ennis Del Mar: [looking up at night sky] I was just sending up a prayer of thanks.

Jack Twist: For what?

Ennis Del Mar: For you forgettin’ to bring that harmonica. I’m enjoying the peace and quiet.

Jack Twist: For how long?

Ennis Del Mar: For as long as we can ride it. There ain’t no reins on this one.”

For Ennis, a threatening cloud hangs over his relationship with Jack. When Jack talks about the pain of having to be apart, Ennis continues to argue that they had to deny each other’s comfort. The intermittent visits were all they could hold on to, but as they get older, their visits become less frequent and Ennis continues to bury his feelings as best as he can. The portrayal of Ennis Del Mar in ‘Brokeback Mountain’ continues to be one of the most powerful materializations of the late Heath Ledger’s acting prowess.

7. “You ever get the feelin’… I don’t know, er… when you’re in town and… someone looks at you… suspicious, like he knows? And then you go out on the pavement and everyone’s looking at you like they all know too?”

8. “Jack Twist: That’s more words than you’ve spoke in the past two weeks.

Ennis Del Mar: Hell, that’s the most I’ve spoke in a year.”

The pain of having to stay apart overwhelms Jack (played by Jake Gyllenhaal) and the visits are everything he has to hold on to. With time, Jack becomes desperate and cannot withstand the pain of being apart. During their last meet-up, they fight over the love they have denied themselves of over the years. This is when Jack says the famous line: “I wish I knew how to quit you” to Ennis. This is one of the most iconic quotes from the movie, a quote which is even known by many people who have not watched it. Enjoy these Jake Gyllenhaal quotes, from the man who played Jack in ‘Brokeback Mountain’.

10. “Truth is, sometimes I miss you so much I can hardly stand it.”

Sadly Jack dies in a car accident in the movie ‘Brokeback Mountain’. Some days later Ennis discovers the death of Jack from his wife Lureen. A heartbroken Ennis visits Jack’s house in Texas, where he finds  out from Lureen that Jack wanted his ashes to be scattered on Brokeback Mountain. This leads to an emotional scene. At the very end of the movie, years later, Jack’s daughter Alma comes to visit Ennis to tell him that she is engaged and to ask for his blessing. After she leaves, Ennis goes back to his closet where he stares teary-eyed at his and Jack’s shirts hanging together on the wall, with a postcard of Brokeback Mountain above them. The memories of Jack Twist come flooding back and as he tears up, he walks away saying “Jack, I swear!”. This is the last line in ‘Brokeback Mountain’.

1You never know when someone watch over you. 3Sometimes you have to hold on to your decision. 4If you don’t have a choice, you just have to face it. 5I miss you so much. 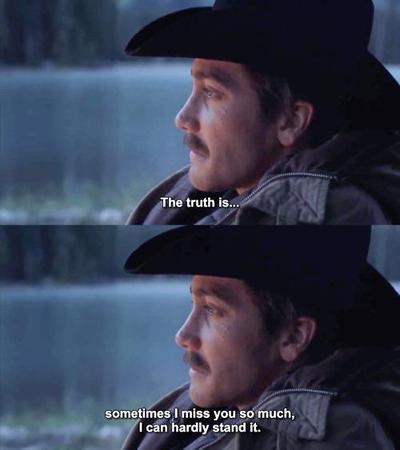 6The room of a ranch man. 7Keeping others out of your business. 8The magic of memories. 9The feeling of attraction. 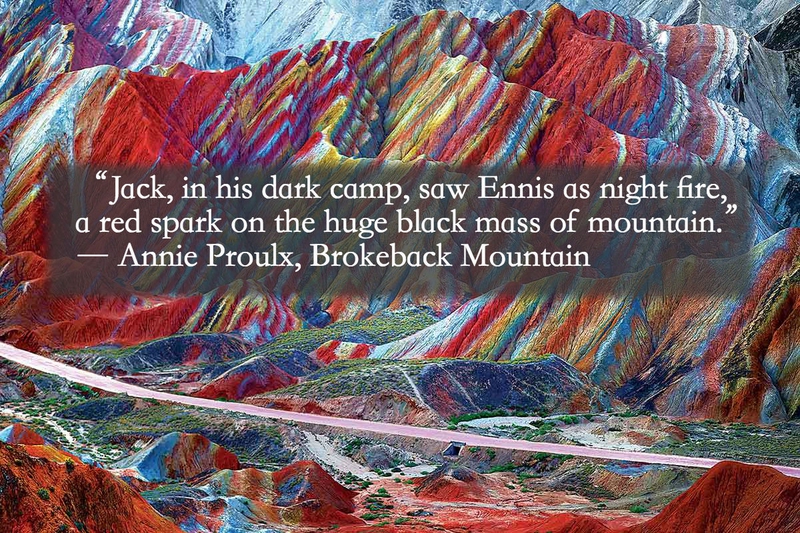 11Ennis reaching out to Jack. 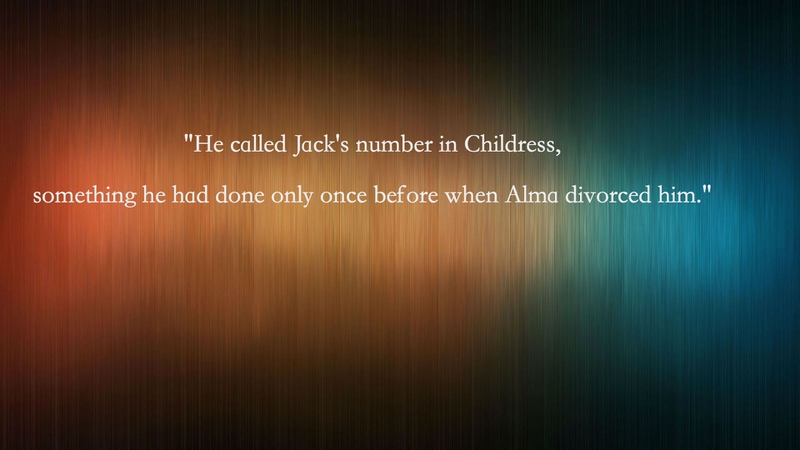 12 They have many in common. 13Physical description gives a clear picture of the person. 15The casualness of a goodbye because men are not supposed to express feelings openly. 16The author refers Jack’s dad as the Stud duck to show how indifferent he was. 18Even after years, the feelings remained. 19Humorous and sarcastic way of looking at the relation of Ennis and Jack by Joe. 20Jack’s dad was responsible for his character. 22This is one of the most popular Brokeback Mountain quotes.

5“Sometimes I Miss You So Much I Can Hardly Stand It.”

As the two men get older, their visits to see each other get less frequent, but their longing for each other never diminishes. While Ennis continues to bury his feelings as deeply as he can, Jack becomes more desperate for them to be together.

As older men, they meet for their usual camping trip and talk about their lives. Then Jack makes a personal and heartbreaking admission about how badly he misses Ennis. He can no longer bottle it up and stand the pain.

Heath Ledger gives such an amazing performance in the film with so much of it being internalized. Ennis denies himself happiness because he’s afraid of what might happen if he follows his heart. In that way, he is the complete opposite of Jack.

Every time Jack talks about them having a life together or how painful it is to be apart, Ennis just reaffirms that they have to make the best of the situation and live with it. This becomes more and more heartbreaking as we see what these two are denying themselves.

Michelle Williams is another powerful member of the cast, playing Alma, Ennis’ wife. They have their own marital struggles, but things are made worse when Alma sees Ennis and Jack kissing when they reunite.

Like Ennis, Alma buries that concern deep down inside herself. But when the two are divorced, Alma finally reveals that she knows his fishing trips were a lie. It is Alma finally voicing her anger, but it also is a moment of confirming Ennis’ fears of people finding out.

At the end of the film, Ennis learns of Jack’s death and visits his parents. In Jack’s bedroom, he finds his shirt Jack kept all these years. Now living alone, Ennis hangs up the short with a photograph of Brokeback Mountain. With tears in his eyes, he says “Jack, I swear.”

It is an unspoken promise, but the audience can understand what he means. Ennis promises to do what Jack had been telling him to do for years, and try to be happy. It is also a reassurance that, though he couldn’t show it, he loved Jack all these years.

This is a line that has become iconic in film history and is well-known by people who haven’t even seen the movie. It has been repeated and parodied many times, but in the film itself, it is a gut-wrenching moment between these two men.

During their last trip together, Ennis and Jack fight over what they have lost throughout these years and how painful it has been. As Jack says this line, it is a moment of realization that things would be easier if only they didn’t love each other so much.

Quotes from La La Land La La Land Quotes – Photo by IMDb from www.imdb.com Here are some of our favorite La La Land quotes. Enjoy! “That’s L.A. They worship everything and they value nothing.” — Sebastian Wilder “I’m letting life hit me until it gets tired. Then I’ll hit back. It’s a classic rope-a-dope.” — […]

Flamingos are one of the most beautiful and magnificent creatures of all time that represent and signify some of the great qualities that everyone should learn. Flamingoes are some of the most unique and beautiful creatures among birds that are considered lucky and have been written about by different people around the world. Flamingos represent […]

Dragonflies have long been described as magical creatures, with some authors declaring them to be as magical as a fairy. These beautiful insects with pretty wings symbolize life balance, change, self-realization, wisdom, power, and poise. Many dragonfly quotes and sayings are not only about their beauty but also about their significance in nature. So, if […]