aristotle onassis quotes: The Greek mogul Aristotle Onassis was born on the 15th of January 1906. Born into a rather wealthy family in Izmir (or as was then known Smyrna), Onassis later grew to become the wealthiest and most famous mogul, businessman, and shipping magnate of the early 20th century, until his death in 1975.

Aristotle was the second born child of Sokrates Onassis, his sister Artemis was born two years before him. His father, Sokrates Onassis, was one of the wealthiest tobacco merchants and entrepreneurs of Izmir. His mother Penelope Dologlou was married at 17 but died at the relatively early age of 33. His grandmother Gesthimani was very religious and hoped her grandchild would be a priest. Therefore, from a very young age he was an altar boy and enjoyed singing Byzantine hymns.  As a student though he started drawing away from the church. 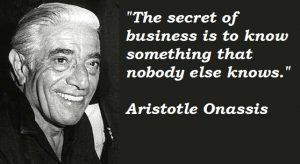 After the Asia Minor catastrophe his father was put in prison, their business was taken over by the Turks and their warehouse was burnt down. Having no other choice Aristotle was forced to migrate in search for a better life for him and his family.

Listed below are some of his most famous quotes: