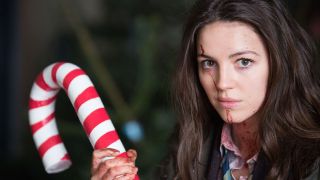 Christmas zombie musical here’s been enough zom-coms (and even zom-rom-coms) to feed a horror fan well beyond satisfaction over the last 14 years since Shaun of the Dead first hit theatres, but what happens when you throw Christmas cheer and a few song and dance numbers into the genre’s well worn recipe? The answer is Anna and the Apocalypse, a Christmas zombie horror musical that’s been kicking up a storm at movie festivals throughout 2018, and is finally releasing theatrically on November 30 in the UK and December 7 stateside.

Speaking to GamesRadar’s sister publication, SFX magazine, Scottish director John McPhail and leading star Ella Hunt look back on Anna and the Apocalypse’s award-winning origins, as well as shedding light on some behind-the-scenes trivia from the making of the movie itself. These are the 5 things you need to know about Anna and the Apocalypse, straight from the horse’s mouth.

1. It began life as a short

“The idea was the brainchild of Ryan McHenry,” explains McPhail. “Ryan made a short called Zombie Musical, after watching High School Musical and thinking, ‘Wouldn’t it be amazing if Zac Efron got chased by zombies?’ So they shot the short and won a New Talent BAFTA and they wanted to turn it into a feature.” Tragically, McHenry died from bone cancer in 2015, so McPhail stepped in as director after producer Naysun Alae-Carew saw his 2015 comedy Where do we go From Here.

3. The humour is relatable

One of the film’s best jokes has the characters arguing over which celebrities are still alive, which are dead, and which are zombies – “Tay-tay is NOT dead, you take that back!” That streak of humour was a key factor for Hunt. “What I like about our zombie movie,” she says, “is we never try to work out how the zombies got there. I think audiences and filmmakers often get distracted by going, ‘Where? How? Why?’ instead of enjoying a human reaction to something completely surreal. So there’s plenty of opportunities for comedy.”

Songwriters Roddy Hart and Tommy Reilly have put a lot of effort into getting the songs right, with the sort of soundtrack that will have you rushing to Spotify afterwards. However, one song stands head and shoulders above the rest. As Hunt explains, “Marli Siu, who plays Lisa, has this Santa song that’s laden with innuendo. I loved it from the top.” SFX has seen the scene and can confidently confirm it’s a YouTube hit waiting to happen.

5. The director’s a horror fan

“I was weaned on horror,” McPhail says. “When I was growing up, my mother used to come in and be like, ‘Night of the Living Dead is starting on Channel 4!’” McPhail also drew on John Carpenter, Evil Dead, and The Rocky Horror Picture Show. “I tried to get everybody on set to watch The Happiness of the Katakuris by Takeshi Miike,” he recalls. “I said, ‘It’s the original zombie musical!’ but they were all like, ‘I don’t know if I want to watch that.’ I think there was only one guy who watched it in the whole production!”

Christmas Wishes for Boss: The season of Christmas is definitely the time to get cozy, tipsy, and wrap yourself in lovely festive vibes. We begin planning for the Christmas celebration months in advance with our families and friends. However, what about working families? What about the man who hires you and gives you the opportunity […]